The lifting of the fog surrounding Ahmet Atakan's death 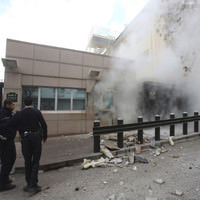 The September 9th death death of Ahmet Atakan, a native of Armutlu, a town within the south eastern province of Hatay,has been an event that has caused much controversy within Turkey.

The September 9th death death of Ahmet Atakan, a native of Armutlu, a town within the south eastern province of Hatay,has been an event that has caused much controversy within Turkey. The 22-year-old's death has been followed by allegations over his disputed cause of death, those opposing the government suggest that it was caused by a tear gas canister fired by riot police responding to a protest staged to support student groups in Ankara's Middle Eastern Technical University (ODTÜ) (the institution that caused last week's uproar in Turkey, you may refer to my earlier article here) opposing the construction of a road that would run through their campus, while police sources state that the cause of death was due to a fall from the roof of a building; claims which are supported by footage taken by Anadolu Agency.

This sorrowful occurrence has stirred nationwide debate amongst the polarized public. Anti-government groups, such as the DHKPC (the very same group responcible for the bombing of the American Embassy in Ankara last February), jumped on the social media bandwagon following the event claiming it to be a deliberate government attack on Turkey's Alevi community. Announcements from government officials that they will carry out a full investigation on the cause of Ahmet Atakan's death were taken to no avail by marginal groups calling for the mobilization of Alevi citizens against the police in Turkey.

While these calls for mobilization went mostly unanswered by Alevi comunities, these calls were responded to by some members of marginal leftist groups, who organized a march in Hatay as the evening hours progressed.

The proponents of the claim that it was a tear gas canister that lead to the death of Ahmet Atakan, include a select group of journalists that are basing their allegations on statements made by certain doctors (even though said doctors had not actually been assigned to treat the patient). In articles written on the tragic event, these doctors allege that little evidence was found to show that Ahmet fell from a lethal height. Contrary to these claims however, stands the footage obtained by Anadolu Agency, that shows the 22-year-old's fall from the rooftop, which coincides with the claims of the police forces at the scene.

Though contrary to the claims in the articles of these select journalists, the official autopsy performed at the hospital where Ahmet Atakan lost his life states that the cause of his death was due to a fall from a high altitude. Specifically, the autopsy report states that his death was due to the trauma from the impact that caused the snapping of his spinal cord, the fracturing of his skull, and internal bleeding within his brain and other internal organs. Thus the findings in the autopsy were conclusive, it was the trauma that resulted from the fall that caused the death of Ahmet Atakan, and not the alleged tear gas canister as some journalists and supporters of marginal groups had previously claimed.

The footage of the event, that the police department released earlier today shows the events that transpired leading to Ahmet Atakan's death in detail. The footage that was released to the media and the public depict the events leading up to Ahmet's death. In this video we see Ahmet standing atop a residential structure, throwing down projectiles that appear to be large rocks or construction debris on to the police on the street bellow, during the course of which he somehow ends up falling. The release of this footage has served to falsify claims of provocation-seeking marginal groups, along with some media outlets that aired earlier allegations that Ahmet Atakan's death was an outcome of a deliberate police attack upon the Alevi population.