PM Erdoğan: Islamophobia is a crime against humanity 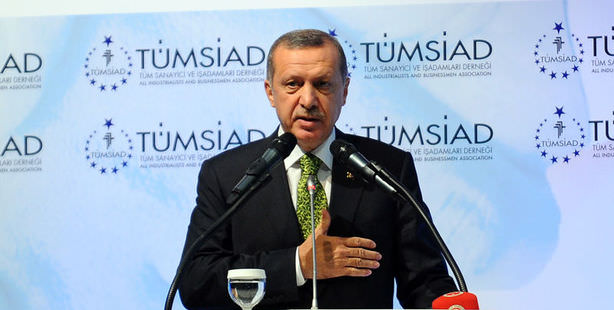 PM Erdoğan delivered a message to a conference on Thursday stating that Islamophobia is a form of racism and crime of humanity. The Prime Minister also said that the Assad regime is now buying time and expressed doubt that the chemical weapons handover will fruition.

Prime Minister Recep Tayyip Erdoğan said on Thursday that Islamophobia is a form of racism just like all other forms of discrimination and described the term as a crime against humanity.

In a message delivered to the "International Conference on Islamophobia: Law and Media" which is being held in Istanbul from September 12-13, Prime Minister Erdoğan stated that the concept of Islam is being perceived in a negative way, deriving defamatory, dismissive and alienating connotations in the western world.

"It must be known that Islamophobia is just as dangerous as racism, discrimination or anti-Semitism. Due to the fact that Islamophobia is a form of racism, just like discrimination, it also is a crime against humanity," Erdoğan said. Stressing that Islamophobia is evident in movies, soap operas, music, media, photographs and unofficial articles and essays, Erdoğan stated that 9/11 has resulted in causing a hostile perception of "Islam" in the western world. He added, "There is no monotheistic religion that adopts, supports, permits or leads to terror."

Prime Minister Erdoğan also addressed a TUMSIAD Businessmen Association conference during which he commented on the Russian proposal accepted by Syria for the Assad regime to handover its chemical arms stockpile to international control.

"In a situation that results in death, it is considered a crime to use chemical weapons, but not if by bombs from airplanes. Death is death no matter what form of weapon is used. This regime needs to be held accountable for this. Assad has not kept any of the promises he has made thus far, and now he has gained time to stage further massacres. Assad continues to buy time while seven million people have become emigrants," stated Erdoğan.

Expressing his doubts that the chemical weapons handover will be realized, Prime Minister explained that Turkey has spent two billion dollars on the refugees coming in from Syria; however, they have only received 140 million dollars in external aid.