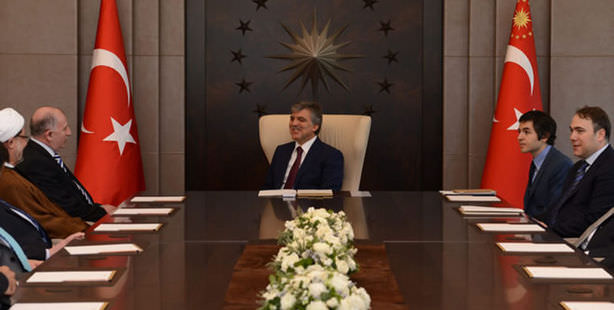 In a meeting with a delegation from Iraq, including Speaker of the National Assembly al-Nujayfi, President Gül expressed his hope for Iraq to attain peace, unity and stability.

President Abdullah Gül received an Iraqi delegation on Thursday led by Speaker of the Iraqi National Assembly Usama al-Nujayfi at the Tarabya Palace in Istanbul. The delegation, consisting of a group representing a wide spectrum of Iraqi society, arrived on September 11, 2013 upon invitation by Parliament Speaker Cemil Çiçek.

Nujayfi was joined by Group Chairman of the State of Law Coalition Khalid al Atiyyah, Fuad Masum Group Chairman of the Kurdish List, former Iraqi ministers of finance and interior, Iraqi Supreme Islamic Council Bakir Cabr Solag and 14 members of Parliament that are or of Kurdish, Turkmen, Christian, Shiite and Sunni background.

In a statement published on the presidential website following the meeting, President Gül expressed his most sincere hope for Iraq to establish the position it deserves in the region as a stabilized, developed and respected state with internal peace and unity. Expressing how pleased he was to receive a delegation representing a large spectrum of Iraqi society, Gül underlined the deep-rooted strong ties between the two countries and stated that the main contributing factor was this connection. Gül also shared his grief over the recent bombings in Iraq.

In return, the delegation expressed their gratitude for the friendly hospitality they have experienced in Turkey since landing in the country. Delegation members also emphasized the deep-rooted ties connecting the two countries in history and expressed that it is due to this factor that cooperation between the two countries should be at the highest level. The delegation stated that this visit was a clear sign of their willingness to construct a common and strong future.

President of the National Assembly of Iraq Usama al-Nujayfi said that officials of the two countries will be conducting an intense traffic of visits in the upcoming days. Nujayfi said that they have had positive negotiations with Turkish officials and added that a series of meetings will soon begin between the countries, starting at the foreign ministerial level and then leading up to a meeting of prime ministers.

Expressing that their wish is to improve relations between the two countries in the aftermath of tension, which has lasted for two years now, Nujayfi said that he had the opportunity during this trip to also meet with Prime Minister Recep Tayyip Erdoğan, Foreign Minister Ahmet Davutoğlu and Parliament Speaker Cemil Çiçek.