Davutoğlu and Arınç announce Turkey shot down a Syrian helicopter 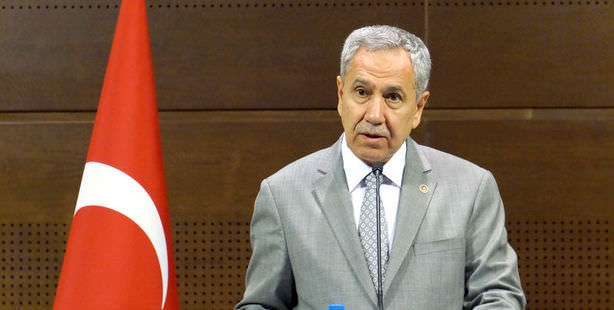 Foreign Minister Ahmet Davutoğlu and Bülent Arınç both announced on Monday that Turkey’s Air Force has shot down a Syrian helicopter.

A Syrian helicopter was shot down on Monday afternoon at 14:26. Conflicting reports initially surfaced as the details of the incident were awaiting verification, with speculation surfacing that opposition forces had shot down the plane. However, on Monday evening, statements released by Deputy Prime Minister Bülent Arınç and Foreign Minister Ahmet Davutoğlu confirmed that Turkish warplanes shot down a Syrian helicopter after it violated Turkey's border despite being issued numerous warnings.

Deputy Prime Minister Bülent Arınç spoke to reporters following a cabinet meeting chaired by Prime Minister Recep Tayyip Erdoğan. "Today at 14:20, a Syrian MI-17 helicopter violated the Turkish border by two kilometers in the Yayladağı region of Hatay province. F-16's took off from Malatya and downed the helicopter with a missile," Arınç told reporters. The Deputy Prime Minister added that Turkey had announced that the rules of engagement had changed after Syria downed a Turkish jet last year in June.

Speaking to reporters in Paris, Foreign Minister Ahmet Davutoğlu also announced that after issuing numerous warnings, the Turkish Armed Forces shot down a Syrian helicopter for violating Turkish air space. Davutoğlu stated that Turkey conducted a "punitive operation" on the Syrian helicopter, which he said was in line with international law and the rules of engagement. "This was a punitive operation," said Davutoğlu.

"The Syrian helicopter fell approximately 400 meters into Syria after exiting Turkey's air space. Turkey will absolutely not allow any violation of its borders. Turkey will also not allow for the crisis in Syria to infiltrate our nation or to transform into a violation against our country," said Davutoğlu, adding, "We are resolute on protecting our borders and our citizens."

Davutoğlu said that the issue will be brought to the UN Security Council and stressed, "Nobody will dare violate Turkey's borders ever again. We have taken the necessary measures on that matter."

The Turkish Armed Forces also released an official statement Monday, confirming that Turkish jets had shot down a Syrian helicopter after it violated Turkey's air space.

"The Syrian helicopter was detected 26 nautical miles from Turkish airspace at 1:41 p.m. and was repeatedly warned by the Combined Control and Reporting Center (BİKİM) in Diyarbakır. The helicopter proceeded to violate Turkish airspace, encroaching two kilometers into Hatay's Yayladağ district. It was shot down by two Turkish jets at 2:27 p.m. and landed on Syrian soil," the statement said.