Turkey says Syria deal is a positive step yet not enough 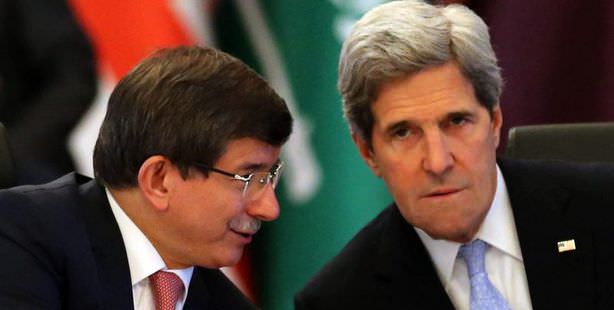 Foreign Minister Davutoğlu departs for Paris today upon invitation by U.S. Secretary of State Kerry to discuss developments with Syria as the sole nation, which has been in contact with the Syrian public and can relay the views of the opposition.

Foreign Minister Ahmet Davutoğlu departs to Paris today upon invitation by U.S. Secretary of State John Kerry. During the summit, which is expected to be attended by leaders from Britain, France and a number of Arab nations, the details of the agreement reached by the U.S. and Russia on the disposal of Syria's chemical stockpile will be the focus of the agenda.

Foreign Minister Davutoğlu, who convened with members of the Syrian opposition just last night, will be relaying their views at today's summit as the sole country to be in communication with the Syrian public. Turkey feels that although the agreement is a positive move, it is not enough. Davutoğlu will be reiterating his stance that the chemical arms agreements with Syria not result in lighting a green light for the Assad regime and will pose the question, "What happens if Assad continues to stage massacres up until the mid-2014 timeframe for the eradication of their chemical arms stockpile?" Turkey has in essence expedited diplomacy in the Syria crisis, which has already led to the deaths of over 100,000 people.

U.S. Secretary of State Kerry has paid two calls to Davutoğlu over the past two days in order to relay information on the means and method of which the U.S. has agreed with Russia on how the Syrian regime will deal with the handover and disposal of their chemical weapons. Upon Kerry's invitation, Davutoğlu is now headed to Paris today. During the summit, the U.S. will relay the details of the agreement reached with Russia.

Last night, Davutoğlu had the opportunity to host President of the National Coalition for Syrian Revolutionary and Opposition Forces Ahmad Jarba, SNC interim government leader Ahmad Tumeh and Free Syrian Army Chief Salim Idris at the Foreign Ministry residence in Ankara and today he will be relaying their views in Paris as being the sole country to be engaged with the Syrian public. Although Turkey feels that the agreement is still lacking, Davutoğlu will emphasize that the decision to eradicate Syria's chemical weapons arsenal is an important and positive step.

WHAT WILL HAPPEN IF THE MASSACRES CONTINUE?

Davutoğlu will reiterate his stance however, that the chemical arms agreement should not result in lighting a green light for Assad to continue to stage massacres. Davutoğlu will be bringing to the table the question of what will happen should Assad continue to strike his own public during the timeframe leading up to the chemical weapons dismantling, planned by mid-2014?

An announcement released by Turkey's Foreign Ministry stated that Turkey found the agreement made between Russia and the U.S. to be a positive step, however it stated, "On the other hand, this agreement should not be perceived as the final solution to the Syrian crisis and the massacres committed by the regime without resorting to chemical weapons must absolutely be prevented."

The Foreign Ministry press release on September 14 stated that Turkey welcomes, as a matter of principle, the dismantling of all weapons of mass destruction in the world and in our region, and for chemical weapons in particular. "Therefore, the agreement reached today in Geneva between the United States and the Russian Federation regarding the chemical weapons possessed by the Syrian regime was welcomed as a positive step and assessed carefully," it stated.

"Placing the chemical weapons in the Syrian regime's inventory under international control and destroying them is extremely important as it will enable the elimination of a threat to regional and global peace and security. This agreement must not be exploited by the Syrian regime and must not turn to a process by which the regime would gain time to carry out new massacres against its people. The announced timeframe is lengthy and susceptible to the exploitation of the regime," the statement read, adding, "The sanctions that will be imposed in the case the regime does not rapidly and strictly fulfill its obligations and the agreement comes to naught should be spelt out clearly from the start."