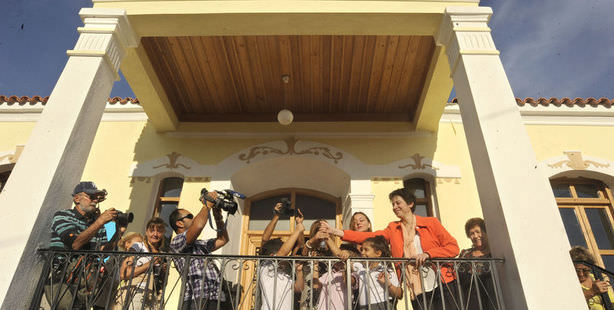 The Private Gökçeada Greek Elementary School reopens its doors today with four students, for the first time in 49 years since its closure. Principle Katakalos of the school formerly named the Aya Todori Primary School, says, “It is an honor to be administrating the school where my mother and father studied.”

The Private Gökçeada Elementary School, also known as Aya Todori Primary School, reopens today in Gökçeada, an island in the Aegean Sea in Çanakkale province, with four students for the first time in 49 years.

The Aya Todori Primary School, which was founded in 1951 and then closed in 1964 by request of its founder, has undergone massive renovation efforts including special desks brought in from Istanbul and an Atatürk corner, which now boasts a Turkish flag. Principle Paraşkevi Berber Katakalos says she is proud to be appointed as an administrator at this school where her parents studied.

The Private Greek Elementary School is situated in Zeytinli village, four kilometers' distance from the city center. Founder Anna Koçumal, who migrated from the island in 1964 then returned decades later, applied to the Turkish Ministry of National Education for permission to reopen the school, which was renovated by the Greek Orthodox Church Foundation in 2012. The National Education Ministry approved the request and has appointed Paraşkevi Berber Katakalos, the daughter of Zeytinli village residents Yorgi Berber and Stella Berber as principle. A Turkish teacher will also be appointed as vice-principal and a teacher will be brought in from Greece to teach Greek lessons and kindergarten class.

Education in the school will be provided in both Turkish and Greek. Gökçeada District National Education Director Kutlu Tekinbaş commented on the momentous reopening of the school by stating, "We want this school to remain active and we are providing all of the support that we can. There were difficulties in reaching the mandatory number of students; however the current number registered has sufficed."