A P3+1 formula for England, France, U.S. and Turkey 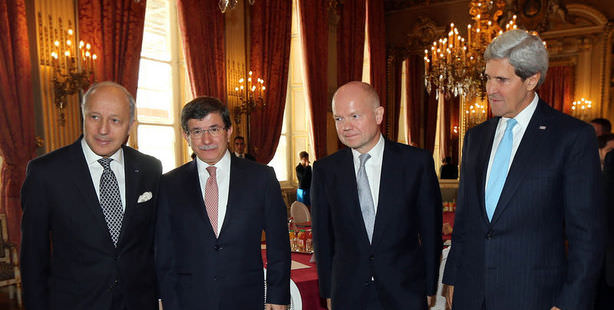 Foreign Ministers from Turkey, the United States, England and France convened for a “P3+1” summit in France in light of the U.S. and Russian agreement for Syria to eradicate its chemical arms stockpile.

Foreign Minister Ahmet Davutoğlu convened with his US , British and French counterparts in Paris on Monday for a summit which determined that Turkey is in a key position in regards to reaching a solution to the humanitarian crisis in Syria.

Foreign Minister Davutoğlu announced during the meeting that Turkey welcomes the agreement reached between the U.S. and Russia for Syria to eradicate its chemical arms stockpile and considers it to be a positive step forward. However, Davutoğlu drew attention to the fact that over a hundred thousand people have been killed in Syria and stated that effective steps need to be taken urgently in order to halt the bloodshed committed by the regime against its own people.

Speaking to reporters following the meeting held in Paris with US Secretary of State John Kerry, British Foreign Secretary William Hague and their French counterpart, Laurent Fabius, Foreign Minister Davutoğlu stated, "To solve the chemical weapons issue does not put an end to the crisis. The crisis can still escalate without the use of chemical weapons," he warned.

Meanwhile, expressing that Assad's games will not be tolerated; U.S. Secretary of State Kerry stated that the UN draft resolution they plan to submit will emphasize that there will be heavy repercussions if it is not adhered to by the Syrian government.