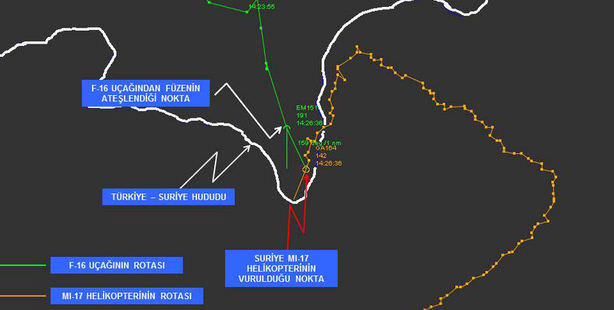 Turkish F-16s took off from an air base in Malatya and proceeded to shoot down a Syrian helicopter, which had violated Turkey’s airspace on Monday. One of the pilots on board the Syrian jet was killed while the other has been captured by Free Syrian Army militants.

Yesterday, Turkey shot down a Syrian helicopter, which violated the Turkish border in the airspace over Hatay's Yayladağı district. The move was a retaliation of sorts for the Turkish F-4 Assad's forces downed without issuing previous warnings on June 22, 2012 off shore of Latakia. The Syrian MI 17 helicopter, which violated the Turkish border numerous times, was shot down by missiles from Turkish warplanes, which took off from Malatya.

Deputy Prime Minister Bülent Arınç announced on Monday that the Syrian helicopter had violated Turkey's borders by two kilometers and as a result it was downed by Turkish F-16's which took off from Malatya and shot the helicopter with a missile at 14:25 after which it crashed on Syrian soil.

ARINÇ: SYRIAN JET VIOLATED TURKISH AIRSPACE AND WAS BROUGHT DOWN

Speaking to reporters after a Council of Ministers meeting, Deputy Prime Minister Arınç stated, "Today (yesterday) at 14:20, a Syrian MI-17 helicopter violated the Turkish border by two kilometers in the Yayladağı region of Hatay province. F-16's took off from Malatya and downed the helicopter with a missile."

Arınç added that Turkey's planes conduct reconnaissance flights 24 hours a day over the border. "As you know, ever since our plane was downed by Syria as well as due to the fact that we are subjected to harassment fire constantly in the Akçakale Viranşehir district, our rules of engagement have changed, and everyone knows exactly what that means," said Arınç.

"NO ONE WILL EVER DARE VIOLATE TURKEY'S BORDERS"

Speaking to reporters following the "P3+1" summit, Foreign Minister Ahmet Davutoğlu stated, "Turkey will absolutely not allow any violation of its borders. We are resolute on protecting our borders and our citizens to the end. No one will dare violate Turkey's borders ever again."

The Turkish General Staff also released an announcement on Monday, confirming that Turkish jets had shot down a Syrian helicopter after it violated Turkey's air space.

"A Syrian M-17 helicopter was detected 26 nautical miles from Turkish airspace at 1:41 p.m. on September 16, 2013 and was repeatedly warned by the Combined Control and Reporting Center (BİKİM) in Diyarbakır. Warnings were issued repeatedly, however at 14:25, the helicopter violated Turkey's airspace, encroaching two kilometers into Hatay's Yayladağ district at an elevation of 14,200 feet. As a result the Syrian helicopter was shot down by one of two F-16's that were assigned to patrolling the region at 14:27 on the Turkish side of the border and crashed one kilometer into the Syrian side of the border." The Turkish Armed Forces also released a map (shown above) detailing the radar tracking of the Syran helicopter.

Of particular note is the fact that it was two F-16's which took off from Malatya that intervened in the Syrian helicopter which violated Turkey's borders. On June 22, 2012, it was a Turkish F-4 which also took off from Malatya that was downed by Syria off the shore of Latakia. After Syria's downing of a Turkish jet, Turkey changed its rules of engagement and Prime Minister Erdoğan announced that any military element that approaches Turkey's borders will be considered a threat and dealt with accordingly. Within the framework of the new rules of engagement, Turkey has had F-16's patrolling the border 24 hours a day. These jets have been given permission to strike any element they detect as a threat anywhere five kilometers into the Turkish border.