Main opposition CHP leader says Turkey did what was necessary 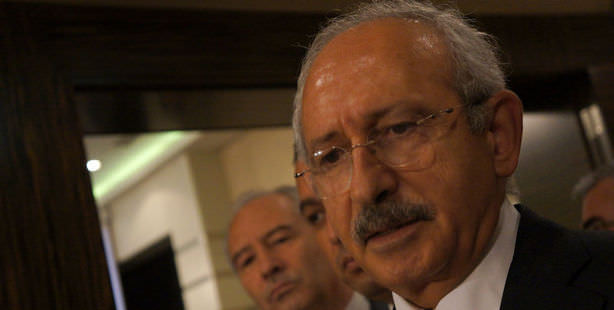 Main opposition party leader Kılıçdaroğlu told reporters on Wednesday that Turkey did what was necessary by shooting down a Syrian helicopter that violated its airspace and added that the Syrian side has also admitted that they violated the rules of engagement.

Chairman of the main opposition Republican People's Party (CHP) Kemal Kılıçdaroğlu, commented on the Turkish Armed Forces downing a Syrian helicopter which violated Turkey's airspace despite multiple warnings on Monday for reporters during a dinner held for Turkish war veterans and families of those killed in the line of duty held at Bilkent Hotel in Ankara on Wednesday on behalf of Veterans' Day. "The Syrian side accepts that they transgressed the rules," said Kılıçdaroğlu adding, "Turkey did what was necessary."

Syria accepts that they violated the rules…

"The Turkish Republic had announced to the whole world that it had changed its rules of engagement and had said that they would do whatever necessary if these rules were violated," stated Kılıçdaroğlu.

"Therefore, Syria also accepts that they transgressed the rules. Turkey did what was necessary; this is how the situation needs to be perceived. However, of course it is debated amongst the public opinion.

CHP Chairman Kılıçdaroğlu also criticized what he referred to as Turkey's nearly inexistent border. Stating that it seems everyone can easily pass through the border, Kılıçdaroğlu stated, "No one knows who is entering and who is exiting. There actually no longer remains a border between us and Syria."

Asked to comment on the project to combine a mosque and cemevi, Kılıçdaroğlu stated, "Everyone should be able to practice their form of worship wherever they choose. This earth is a place of worship."