PM Erdoğan: “Nobody should try to test us” 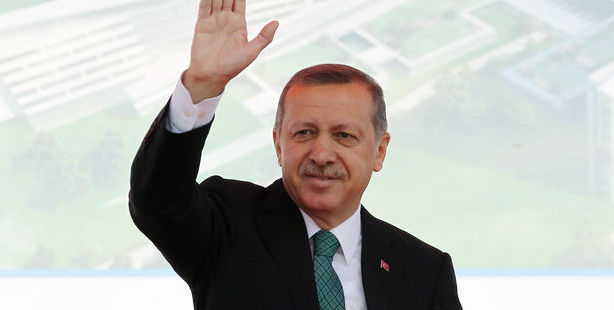 Warning Syria to “not test Turkey’s patience, Prime Minister Erdoğan delivered an address on Wednesday in which he also directed a message to Gezi Park protesters, stating, “in order to expect respect, you need to show respect. The Prime Minister also revealed that the democracy package is currently in the redaction stage.

Prime Minister Recep Tayyip Erdoğan delivered an address at a groundbreaking ceremony held yesterday for a new Bilkent hospital complex in Ankara during which he issued a harsh message to the Damascus administration in regards to Turkey's downing of a Syrian helicopter on Monday. "We will continue to act with the reflexes of a great state. I hope and believe that no one will misinterpret Turkey's patience and restraint and attempt to test us."

Prime Minister Erdoğan also commented on the ongoing efforts to release a democracy package by stating, "This package has a number of headings that will answer a series of the public's expectations," adding that the package has been finalized and is now in the redaction stage. "As the AK Party and the AK Party government in power, we have always placed the public above the state and have said that all of our efforts are for the people."

As for the situation in Syria, Erdoğan said, "As Turkey we are not interested in any other country's land. We also have no intentions of meddling in another state's internal affairs. However, we are exerting a clear and principled stance against any attempts that transform into oppressing the public we consider to be our brothers and that directly affect the region, thereby surpassing internal affairs."

On the Gezi Protests…

Prime Minister Erdoğan also commented on the Gezi Park protests by stating that Turkey is carefully and sensitively following all attempts to drag the country into chaos and is acting with restraint in doing what needs to be done. Expressing that they have always sided with moderation, cool-headedness and reason, Prime Minister Erdoğan stated, "In the same manner that we respond to actual attacks directed at Turkey, we will also respond and are responding to plans to incite chaos within the nation which we will never tolerate. We have always acted based on principles, justice and rights."

Erdoğan went on to add, "We have always believed in a world in which those who are right are strong, not one in which the strong are the ones that are right and we have fought to uphold this type of world. We will continue to act in this manner and will continue to exert our principled stance. We will continue to act with the reflexes of a great state. I hope and believe that no one will misinterpret Turkey's patience and restraint and attempt to test us. Therefore, in the face of this sort of wronging, we will not refrain from responding with the force granted to us by law."

Prime Minister Erdoğan proceeded to then directly address those he said were attempting to disrupt the nation's peace by stating, "What you are doing is disrespect, not only to my public and my merchants but also to yourselves. We will respect whatever your perspective is, however to offer respect means that the other perspective must also be respected. If you do not have respect for those with different perspectives, then you will also not receive respect. If you go above the law, then our security forces will have to respond as necessary within the bounds of the law," stated Erdoğan.