PM Erdoğan says millions in Syria are at risk 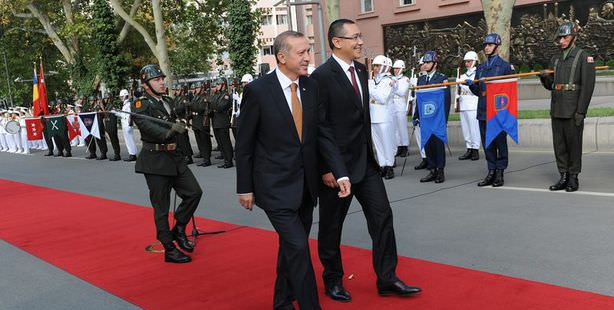 Prime Minister Erdoğan warned on Thursday that the dams in the Euphrates at risk as a result of the Syrian regime’s bombing and warned that millions of people are in danger of being submerged in water.

Speaking to reporters at a press conference held with his visiting Romanian counterpart Victor Ponta, Prime Minister Recep Tayyip Erdoğan commented on the recent explosion at the Bab al-Hawa border crossing in Syria, in what he called was a now routine strike by the Assad regime, and eluded to possible amendments to a motion passed last year by the Turkish parliament authorizing cross-border operations.

TURKEY IS READY FOR ANY FORM OF WRONGDOING: Commenting on the car bomb explosion, which took place on Tuesday on the Syrian side of the Bab al-Hawa border crossing, Prime Minister Erdoğan said that at this stage, these sorts of incidents could now be expected, however he said it was not an attack that was directed at Turkey. "This could have happened in Azaz or anywhere else. The barrel bombs being released over the Euphrates poses a significant risk of explosion and millions could be submerged under water, explained Erdoğan. "The tyrannical regime in Syria is now threatening all of those people who live there. They take steps without taking numbers into consideration, and this happened to be one of those explosions," said Erdoğan in reference to reports that an explosion on the Taqba dam this week has put it at risk. The Prime Minister also added, "Turkey is ready with all of its capabilities to respond to any sort of wrongdoing."

"There may be changes to the cross-border operation motion"

Prime Minister Erdoğan also commented on a new bill to replace a motion passed last year by the assembly authorizing cross-border operations which expires on October 4th. "The new motion may be the same as the one that is about to expire, however there also might be some changes. Our Foreign Ministry and the General Staff are working on preparing the bill and when their efforts are done we will offer our own assessment and then submit the motion to a parliamentary vote," said Erdoğan.

ROMANIA: Prime Minister Erdoğan noted that Romania is a country that has provided strong and unconditional support to Turkey's EU accession bid, which he said they find to be extremely meaningful. Expressing that both he and Romanian Prime Minister Ponta are in complete agreement regarding political and military issues, Erdoğan stated, "Romania and Turkey are on the same side. Romania stands by Turkey when faced with important and difficult decisions. Romania has also stood by Turkey in regards to the situation in Syria."