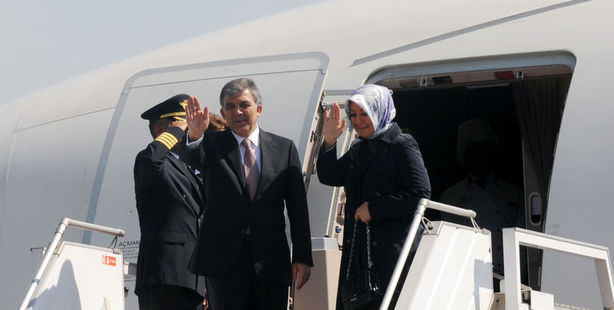 President Gül commented on the overtaking of the Syrian border town of Azaz by Al Qaeda-affiliated militants by stating that Turkey has warned the international community that the crisis in Syria would lead to instability and breed terrorism in the country in crisis, telling reporters, “If this situation continues, it will breed instability and terrorist actions will increase.”

President Abdullah Gül told reporters on Friday that Turkey in no way wants to engage in war and emphasized the crucial necessity of decisive international action. Speaking to reporters at a press conference held at Esenboğa Airport in Ankara before his departure to New York to attend the 68th United Nations General Assembly, President Gül also emphasized that the government's ongoing reform efforts are intended to facilitate the fortification of national unity.

President Gül discussed the recent overtaking of the northern Syrian border town of Azaz by an Al Qaeda-affiliated group and stated that Turkey has warned the international community regarding such developments since the start of the crisis in Syria. "If this situation continues, it will breed instability and terrorist actions will increase," stated Gül emphasizing that Turkey is taking a cautious and solid stance on these concerns. The President stated that Turkey has taken the necessary precautionary measures against terrorism and maintains a solid stance on the issue.

Pointing out that they are well aware the concept of "your terrorists, our terrorists" is a dangerous one, Gül emphasized that Turkey's main priority is protecting the country and ensuring the crisis in Syria does not affect the region. Gül stated that the situation in neighboring Syria is discussed in all state meetings and officials are well aware that this situation is the main topic on the agenda.

When asked to comment on the democracy package set to be released by the government, President Gül underlined the fact that the situation in Syria is currently Turkey's priority foreign policy agenda. Explaining that in every meeting held by high-level officials, Syria is always top priority, Gül highlighted the need for this war to come to an immediate end, because "civil wars are the most ruthless wars," he said. The President emphasized how painful it is for them that a neighboring nation is destroying itself and the people in the country are suffering a grave massacre.

President Gül reminded that great efforts have been exerted to ensure a diplomatic solution to the crisis in Syria, however the international community has not up until recently been aware of how grave the tragedy is, which he said he feels now may be changing. Remarking that Turkey has become a source of inspiration for the region with the reforms they have committed, Gül said that the country is a leading example when it comes to democracy.

Pointing out that even if Turkey reaches European standards of democracy, there will still be more progress to be made; Gül stated that all of the government's reform efforts are geared towards strengthening national unity and to ensure that Turkey's citizens have no cause for complaint.

"TURKEY HAS NO INTENT OF GOING INTO WAR"

When asked if Turkey was in favor of military intervention in Syria, President Gül pointed out that Turkey is a country that wants the crisis to come to an end without engaging in war. Highlighting that Turkey has been one of the countries seeking a solution to the situation in neighboring Syria since the start of the bloodshed, Gül stated, "Nobody wants war. However, if you are not prepared to go into war then you also cannot prevent any wrongdoings. Therefore, this is how the situation needs to be perceived. Turkey has no intent of going into war. Turkey only wants the situation in Syria to come to an end. Turkey wants the international community to take decisive action on the situation," said Gül.

President Gül departed for New York on Friday to attend the 68th session of the United National General Assembly. Scheduled to return September 28, President Gül will have the opportunity to meet with a number of state leaders as well as to share Turkey's stance on ongoing global developments. President Gül is joined by Foreign Minister Ahmet Davutoğlu, Family and Social Policies Minister Fatma Şahin and Development Minister Cevdet Yılmaz. President Gül will be the third speaker to address the UN General Assembly, which convenes on September 24 after addresses by the leaders of Brazil and the U.S., which is the traditional line-up. President Gül will also be the main speaker at a session entitled "Dialogue with Leaders: High-Level Political Forum-From Vision to Action."