Democracy package an important stage but not the last to come 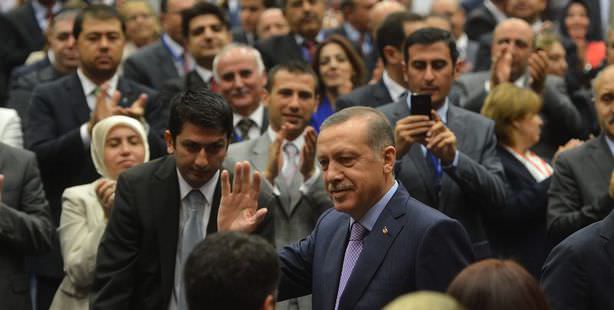 Commenting on the democracy package at a meeting of AK Party Provincial Chairmen on Friday, Prime Minister Erdoğan said that it will include a series of reforms to please everybody and will not be the last to come.

Prime Minister Recep Tayyip Erdoğan commented on the highly anticipated release of a series of reforms included in a democracy package the government has long been tackling. Referring to remarks on the package prior to its public release as being nothing but insufficient and baseless rambling, Prime Minister Erdoğan stated, "This package which we will be finalizing soon, will not be the last of its kind however it is an important step. I would like to also state that the package contains reforms that will please every segment in society."

Commenting on the upcoming elections, Prime Minister Erdoğan assured that they have never been in favor of an election economy. "As the elections approach, no one should approach us with the demands for more money to be filtered into their district. We have already done all that we need to do and to embark upon such a venture as providing funds becase of an approaching election would be to betray ourselves," stated Erdoğan adding, "Service is one thing and ideology is another."

Explaining that what the ruling Justice and Development (AK) Party has done as part of their social state awareness is misconstrued to the public as being part of a campaign budget, Erdoğan asked, "What kind of understanding is this. Our opposition is not one that can even conceive of a social state. Whereas over the past 11 years, we have realized 20 million liras worth of social aid. When you include our social investments, then the amount we have spent on social endeavors is actually 110 billion liras over the past 11 years." Erdoğan criticized the fact that certain circles and especially the opposition attempt to slander voters as being in it for the coal and other goods distributed during campaings by stating, "My nation is too honorable and proud to sell their vote for a bag of coal."

Remarking that the voters reaching the eligible age to vote in the upcoming elections were just seven years old when they first came to power, Erdoğan stated, "Those who in 2002 had not yet been introduced to their environment, country or the world have now grown up. We will be especially focusing on the youth. We need to explain what sort of country this was we took over and need to emphasize how Turkey has changed over the past 11 years."

Explaining that they have wanted to embark upon the democratic reforms to be presented in the package when they first came to power 11 years ago, Erdoğan said that faced with obstacles such as the party being shut down, pressure from the Council of State, coup scenarios, street demonstrations and resistance by the opposition, it has taken up until now to reach where they are today.

"Hopefully we will now once again be presenting reforms in a package that will grant significant rights," stated Erdoğan adding that they plan to announce the democracy package in a press conference next week.

Referring to comments on the package prior to its public release as being nothing but insufficient and baseless rambling, Prime Minister Erdoğan stated, "This package which we will be finalizing soon, will not be the last of its kind however it is an important step. I would like to also state that the package contains reforms that will please every segment in society."

Erdoğan criticized the groundless comments made by the opposition prior to the release of the package by stating, "The concept of opposition in this country results in practically creating a wall against any form of change. They cannot stand Turkey even taking one step forward. Those who have been rambling on even before the package's release will as always once it is released display an opposing stance and manufacture scenarios of fear."