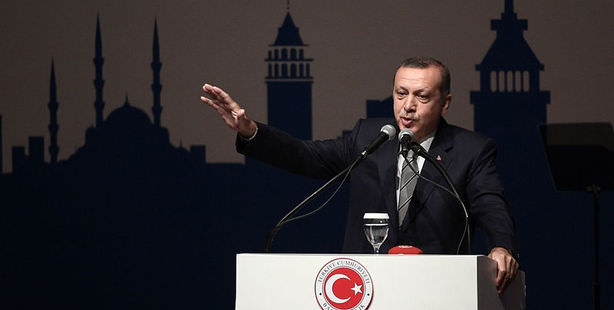 Prime Minister Erdoğan criticized the UN Security Council on Monday in an address during which he stated that humanitarian aid is not being made accessible in areas where it is needed and that expectations are not being met in nations where the UN should be exerting its political influence.

Prime Minister Recep Tayyip Erdoğan delivered the opening address for the Asia-Pacific Congress and Expo held at the Lütfi Kırdar Congress Center on Monday during which he shared his conviction that the 21st century should be one of sharing and solidarity. Expressing that the basis of a number of issues currently being experienced on a global level is the result of greed, Prime Minister Erdoğan stated, "If we want our world to be habitable in 50 to 100 years from now, then we need to pass on a different economical understanding to our children."

Stating that he believes there is a different way to perceive commerce and the economy, Erdoğan stated, "For trade to be sustainable, there needs to be justice and the channels need to be open. There needs to be peace and security established on both a local and global level," said Erdoğan adding, "Massacres and coups close off the roads for trade."

Prime Minister Erdoğan stated that Turkey knows just how important peace is to establish welfare and calm and stated that they support all government systems in which the public will is dominant.

Expressing that they are trying to do all they can for Syria and Palestine, Prime Minister Erdoğan stated, "In a world in which children's blood is shed by chemical weapons, welfare will be dried up just as much as people's conscience."

Erdoğan dishes up criticism of the UN Security Council

"The UN is not doing its duty. Why then was it even formed? A world that is stuck on the decisions made by five countries can never be a fair one. The UN Security Council is still unable to reach a decision on Syria. If we are talking about democracy then steps need to be taken," said Erdoğan adding that the current developments unfolding interests the entire world just as much as it does the Middle East.

Democracy package to be released at month's end

Prime Minister Erdoğan reiterated his plans to announce the details of the democracy package, which will include a series of proposed reforms, on the final day of the month. Reminding that during the global crisis era, Turkey has managed to erase its debt to the IMF, Erdoğan stated that they have established highly ambitious goals for the year 2023 and that they aim to become one of the world's top ten economies by that time. The government's 2023 vision includes a series of goals for Turkey to coincide with the 100th anniversary of the founding of the Turkish Republic. "Turkey is a country whose star shines brighter every day and one that can be invested into," stated Erdoğan.