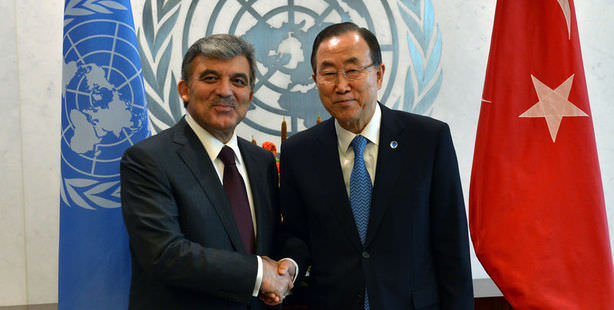 Currently in New York to attend the 68th United Nations General Assembly, President Gül has already begun an intensive round of diplomatic traffic.

President Abdullah Gül, who recently emphasized in a meeting with the press that the Syria issue will be the primary subject discussed at the 68th United Nations General Assembly, has kicked-off his trip to New York by attending a number of events and meeting with various state leaders.

Last night, President Gül was a guest at a very special reception held in honor of UN General Assembly delegation leaders by Michelle and Barack Obama at the Waldorf Astoria Hotel. During the event, President Gül had the opportunity to share face time with a number of state leaders.

Prior to the reception, President Gül took part in a working breakfast held by Merrill Lynch. Later in the day, President Gül met with Austrian President Heinz Fischer in the Turkish Center in New York. Gül then proceeded to attend a lunch hosted by the U.S.-Turkey Business Council after which he hosted Iraqi Vice President Hudeyr Huzai. President Gül also had the opportunity to meet with UN Secretary-General Ban Ki-moon at the United Nations Headquarters. During the meeting with Ki-moon, Gül was joined by Foreign Minister Ahmet Davutoğlu and Turkey's UN Permanent Representative Halit Çevik. Amongst the issues discussed between Gül and the UN Secretary General was Syria's chemical handover proposal as well as the Cyprus dispute and ways to mend ties on the divided island.