Transcripts from the meeting that launched the Feb. 28 ‘postmodern’ coup revealed 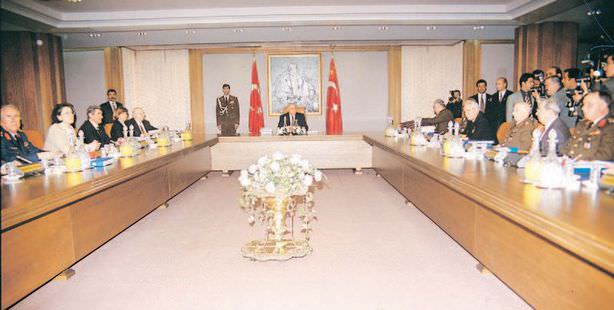 The transcripts from the infamous February 28, 1997 meeting of the National Security Council, which led to the resignation of the government at the time, have arrived to the court hearing the trial into the military intervention regularly referred to as the “postmodern coup”.

The highly awaited transcripts from a meeting held by the National Security Council on February 28, 1997, which resulted in a series of decisions that led to the overthrow of the democratically elected government at that time, have been submitted to the Ankara court where the historical case is being tried. According to the transcripts, Necmettin Erbakan, who was Prime Minister at the time, and Chief of General Staff Gen. İsmail Hakkı Karadayı disputed the signing of a text containing precautionary measures against religious fundamentalism.

The National Security Council reached a total of 18 decisions during the nine-hour meeting held on February 28, 1997, which is considered to be the start of the February 28th coup-era. The decisions were presented to Erbakan for his approval and he was pressured to sign after which he subsequently resigned.

The historical trial is currently ongoing at Ankara's 13th High Criminal Court. With a 1,300-page indictment, a total 103 suspects, including Former Chief of General Staff Karadayi, are being tried for accusations of overthrowing the Turkish government by force. Since receiving the transcripts of the infamous meeting, two delegated judges have been tasked with evaluating what transpired during the meeting as well as the decisions reached and adding all related selections to court records. The following are a series of details that standout in the records from the National Security Council meetings.

COUP WARNING: According to the transcripts, during the meeting a list containing precautionary measures against fundamental activities was read aloud. The list is said to contain a number of allegations by Chief of Staff Karadayı that the secularism of the regime was in threat and that it was decided to not allow the 'ezan' (call to prayer) to be recited in Turkish. General Karadayı supposedly used a number of expressions that allude to warning of a possible coup. During the meeting, Karadayı explained that he was able to sense the forthcoming of the 1960, 1971 and 1982 coups and stated, "We need to find a solution to this; from the perspective of the safety and security of our country this is mandatory."

PRESENTATION MISSING IN TRANSCRIPTS: The National Security Organization (MİT) Undersecretary at that time Sönmez Köksal delivered a presentation on the aspects of the threat of fundamentalism and the necessary preventative measures. The delegated judges have noted in the file records that the text from the presentation on fundamentalism was not included in the transcripts provided.

THE COUNTRY WILL SUFFER FROM A ZEALOT MENTALITY: Prime Minister Erbakan heard out President Süleyman Demirel and the military wing at that time and spoke out against the errors in the views being presented. Erbakan emphasized that people's religious beliefs need to be respected and stated, "The Republican People's Party (CHP) mentality is portraying secularism as an enemy of religion." In response, he was told, "What is true secularism? It is written in the law passed in 1949. The issue was approached with moderation and reason. The country will suffer from a zealot mentality. We must take measures in order to protect democracy and secularism."

FUNDAMENTALISM IS AN ACCUMULATION FROM MANY YEARS PAST: Foreign Minister and Deputy Prime Minister at that time, Tansu Çiller, also spoke at the meeting stating, "What we want is both a secular and democratic Turkey. Democracy is the answer. I find it wrong to politicize religion; meanwhile we must also ensure we do not create partisans between secularism and religion. This is something that is the result of years of accumulation. It will create an adverse reaction to solve the issue using compelling reasons."

ERBAKAN PRESSURED TO SIGN: By the end of the meeting, it is well apparent that Prime Minister Erbakan was loath to sign the 18-item proposal as a National Security Council ruling. The military however proceeded to exert pressure on Erbakan to hastily sign the decisions. While Erbakan said, "No healthy decision can be reached in nine-hours. This cannot be inspected in haste," Chief of Staff Karadayı objected by responding, "This will be handled in ten minutes."

Reverence for the call to prayer being read in Turkish

The Chief of the General Staff at that time, General Karadayı, was also recorded to have said, "There can be no democracy without secularism. I can still hear the sound of the call to prayer being read in Turkish and remember the reverence and excitement I felt…"