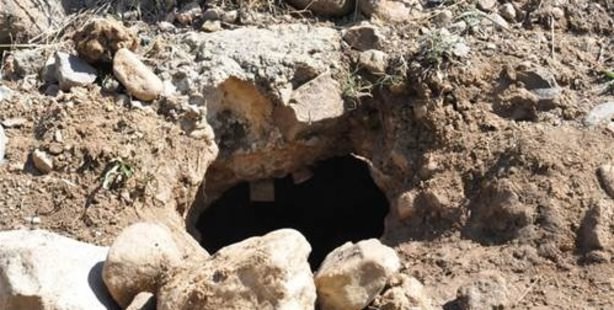 On Thursday, security forces captured the 18 prisoners who the day prior escaped the Bingöl M-type Prison they were serving time in for their involvement with the PKK terrorist organization.

On Thursday, security forces captured the 18 fugitive prisoners that had escaped a Bingöl jail through an elaborate tunnel early Wednesday morning. The 18 prisoners, which are serving time for their involvement with the PKK terrorist organization at the Bingöl M-Type Prison, escaped early Wednesday through a 70-meter-long tunnel, said to have taken them at least a year to clear out. Security forces initiated a widespread search into escaped prisoners early yesterday morning and managed to capture each and every one just a day after their escape. The jail breakers, stated to be members of the PKK terrorist organization or having aided and abetted in their activities, were found in a rural area near the Ortaçanak village in Bingöl center.

SUSPICION OF A MOLE

The 18 prisoners escaped in the early hours of Wednesday through a 70-meter-long-tunnel, stated to have most likely taken a year to dig out. The prisoners managed to discard the soil they dug up by adding it bit by bit to water that they then dumped into the toilets and sinks of their cells. Investigators are now looking into whether the escaped convicts received help from the inside.

HIDDEN FROM THE TOWER

The escape plan went into effect early Wednesday morning, as 18 prisoners, staying in three side-by-side cells, climbed through the tunnel they had dug until they crossed over the fencing near the observation tower at three a.m. Once they managed to reach a forested area outside of the control tower's visibility range, they changed out of their prison uniforms and into plainclothes. The jail breakers were first noticed to be missing just hours later, at seven a.m. A wide-scale operation was immediately initiated with five helicopters as well as unmanned drones seeking the escapees in the rural area of the Karlıova Mountains. On Thursday, initially 17 of the escaped convicts were apprehended in the rural Ortaçanak village while soon after, the 18th prisoner was also arrested by security forces.

Police are now looking into whether their relatives or close ones aided the prisoners or if there was any neglect on behalf of prison personnel. Justice Minister Sadullah Ergin alluded to the investigation by stating, "There are a few questions and an investigation was started immediately in order to look into them." Pointing out that the incident took place as the guards' shifts were changing, Minister of Interior Muammer Güler stated, "There is suspicion that this level of organization most likely had inside or outside support and cooperation."

The High Security M-Type Closed Prison in Bingöl is located just ten kilometers' away from the Kaleönü neighborhood and is surrounded on one side by the Karlıova Mountains. The penitentiary, located just 200 meters from the Bingöl-Muş Highway, is situated on a 30,250 square meter area. Each block has three corridors and 45 rooms. The convicts dug the tunnel over the past year, which they hid under the refrigerator in their cells, in the direction of the wastewater channel leading to the nearby neighborhood.

The tunnel was 70 meters' long and 65 centimeters wide and ended 40 meters away from the prison wall. During the investigation, the tools the escaped convicts used to dig out the tunnel, such as portable electric cables, steel rods and pieces of steel were found as were the uniforms they changed out of. It appears that over the past year, the convicts have been trying to dispose of the soil they dug out by pouring it down into the toilets and sinks in their cells in small increments. It also turns out that a municipal sewage truck had been called a few times over the year due to the toilets being clogged.