Close collaboration on the region with Iran 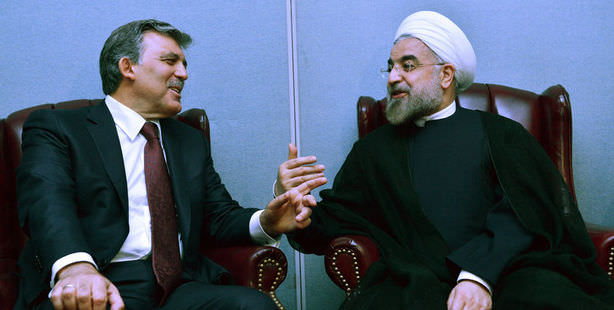 President Gül met with the new Iranian President Rouhani for the first time on Thursday at the Turkish Center in New York.

President Abdullah Gül held a "positive and constructive" meeting with the newly elected Iranian President Hassan Rouhani on the sidelines of the 68th UN General Assembly held in New York. The meeting, which was held at the Turkish Center, was said to focus on the importance of cooperation between the two biggest actors in the region in order to ensure more constructive resolutions as well as the necessity to work in cooperation on putting an end to the humanitarian tragedy unfolding in Syria. It was also emphasized during the nearly 40 minute meeting, which was stated to be "positive and constructive", that Syria has fallen into the position of being a country destroying itself. According to diplomatic sources, the two nations aim to work together on all regional issues, and especially Syria, through reciprocal visits to be paid by both nations' foreign ministers.

For the meeting with Iranian President Rouhani, President Gül was joined by Foreign Minister Ahmet Davutoğlu as well as Development Minister Cevdet Yılmaz.

President Gül also met with the President of the Turkish Republic of Northern Cyprus (TRNC) Derviş Eroğlu in New York. Eroğlu expressed that he was pleased with the decision for special envoys from the TRNC and Greek Cyprus to pay reciprocal visits to Greece and Turkey and referred to it as an egalitarian development that was positive in the name of reaching a solution to the Cyprus issue.

Gül continued to hold a series of meetings while in New York to attend the 68th UN General Assembly. Yesterday, Gül delivered an address at the Foreign Relations Council, sat down for an interview with The New York Times and met with representatives of Turkish associations, members of the Meskhetian Turks community in the U.S. as well as other U.S. resident Turkish nationals.