President Gül assures there is no political risk in Turkey 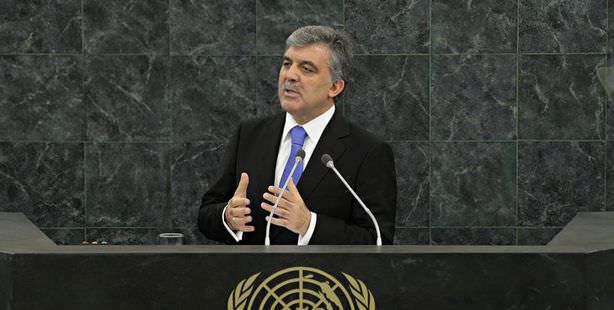 President Gül told reporters that he has had to comment on the Gezi Park protests throughout his stay in New York and predominantly responds to questions regarding the demonstrations by stating, “The issue is not a demand for regime change, there has been misinformation and there is no political risk in Turkey.”

Speaking to reporters in New York on Thursday, where he is attending the 68th UN General Assembly as well as holding a number of meetings with fellow state leaders, President Abdullah Gül expressed that he has been asked to comment on the Gezi Park protests numerous times to which he responds by emphasizing that the demonstrations did not develop in demand of regime change and there is no political risk in Turkey. President Gül also pointed out that the Gezi Park protests started as a result of issues primarily seen in developed nations.

Gül also shared information about the meetings he has attended since arriving to New York and explained that he delivered an address at the UN General Assembly, which U.S. President Barack Obama attended, and later they had the opportunity to talk in length during a dinner in which they shared a table. "We had the opportunity to speak as much as we could have had we held a one-on-one meeting," said Gül. The President also explained that the Syrian chemical weapons proposal needs to be made into a UN ruling and commented on Iran by stating, "A new era is beginning. This is an opportunity for dialogue and compromise."

FRANCE IS CLOSER TO TURKEY'S STANCE

President Gül also expressed to reporters that he is not optimistic when it comes to the situation in Syria. "If the Russian-U.S. proposal fruitions and the Middle East is rid of nuclear and chemical weapons, then every issue, including the Palestine-Israel issue, will be solved," said Gül. Expressing that Turkey supports the Russian-U.S. proposal, Gül emphasized that it needs to materialize.

Commenting on the meeting he held with his French counterpart Hollande, President Gül stated, "Our position on Syria is closer with France than it is with the United States. France is unhesitant when it comes to this issue, whereas Obama constantly refers to 'America's national interests' when discussing the situation."

Asked to remark on the emphasis on Cyprus in the General Assembly, President Gül stated, "This time they did not exit the hall as I delivered my address. I am telling everyone to sit down together with determination and to talk and make progress. In addition, Turkey, Greece, Egypt and other nations could create a separate Eastern Mediterranean column within the EU."

A SOLUTION IN PALESTINE

President Gül also commented on Obama stating that he plans to solve the Palestine-Israel issue by stating, "If the Palestine issue is solved it will be the most significant issue since the Second World War. This would set Obama aside from all the others."

Commenting on the issue of the Gezi Park protests, President Gül stated, "I warned numerous times since the very start that the protests will be extremely damaging to Turkey's image. Now everyone is asking what is happening, including economists. The fact that the demonstrations coincided with certain developments in the Arab world has led to a different perception of the Gezi protests in people's minds. I am in turn pointing out that the situation has nothing to do with the Arab world and is not a request for regime change."

When reminded of a comment he made for the Washington Post that he felt pride with the Gezi protests when they first started, Gül stated, "I have attended the European Council now for ten years. A decade ago, Turkey would surface to the agenda at every meeting for issues such as torture, mistreatment and violations of human rights. These recent incidents (Gezi Park protests) are problems only seen in the most developed of countries. This is something I am proud of. This is a sign of development and democracy," said Gül adding, "There is no political risk in Turkey."

This is a translation of an article originally written by Hasan Bülent Kahraman.