PM Erdoğan: “Discrimination is an act of ignorance” 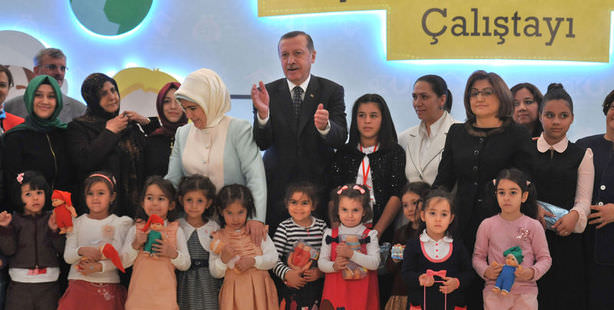 “Our sisters with heads covered and those whose are not will walk hand in hand together,” said Erdoğan, ensuring, “this country belongs just as much to its women as it does to its men.”

Addressing a New Policies and Procedures on Girls Education and Learning Workshop, Prime Minister Recep Tayyip Erdoğan emphasized that there is no discrimination between females in males in Turkey's civilization and referred to any form of discrimination suffered by women and children as being reminiscent of the practices conducted in the era of ignorance in the time proceeding the Prophet Muhammad in which baby girls were buried alive.

Prime Minister Erdoğan emphasized that the more young girls and women are provided education, the faster, closer and healthier a solution will be and stated that they will be tackling the issues faced by female children. "Those who choose to apply imported solutions rather than creating their own will always trail from behind," said the Prime Minister.

Erdoğan explained that in 2002, the rate of girls attending elementary school was at 91 percent, however today that figure is 100 percent. The percentage of girls receiving secondary education was at 72 percent, whereas now that figure is 94 percent and in higher education, the previous 74 percent figure has now reached 87 percent. "With the Haydi Kızlar Okula (Come on Girls, Let's go to School) campaign spearheaded by my wife, we have brought 350,000 girl students to schools," said Erdoğan.

"The habits that have been passed through time since the era of ignorance have resulted in posing obstacles to young girls receiving an education. State schools would exert pressure on girl students to violate their religious practices. For decades female students have been ostracized due to their clothing and have been turned away from university doors as part of a habit of ignorance, which has now come to an end," assured Erdoğan.

"There is no longer such a thing as nationalism in this country, what we have now is a national reality. This country belongs just as much to its women as it does to its men. In this country, the rights and freedoms of our sisters whose heads are covered and those who are not will not be divided, they will walk hand in hand together," said Erdoğan.

Prime Minister Erdoğan also underlined that his government has been striving towards the future with an understanding based on prioritizing the individual and not the state, and pointed out that the U.S. has yet to realize their health care reforms. Explaining that U.S. President Barack Obama has taken steps on health care reform, Prime Minister Erdoğan explained that there are certain circles intending to stand in his way. "Obama needs to be supported," said Erdoğan questioning, "What is this? You cannot spend what I earn on others. How can this be?"