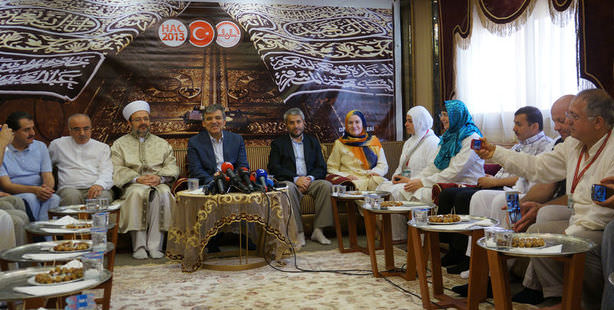 President Gül met with fellow Turkish pilgrims in Mecca, where he is taking part in the Hajj pilgrimage as the first Turkish President to fulfill his religious duty in office. When asked by reporters what he prayed for when he first saw the Kaaba, Gül answered, “That is private and should remain in everyone’s hearts.

President Abdullah Gül, who is currently in Saudi Arabia to perform the Hajj pilgrimage as well as to take part in a series of high-level meetings, also had the opportunity to greet Turkish pilgrims in Mecca.

Exchanging Eid al-Adha greetings and congratulations for those completing the Hajj, President Gül stated, "The Hajj is a great excitement and experience. It is a great occasion to review and to account for ourselves. It is an unforgettable moment."

Pointing out that there were over 70,000 Turkish pilgrims who arrived from Turkey as well as Europe, President Gül stated the following: "I hope Allah grants everyone their wishes. I hope that through this opportunity, everyone has expressed their best wishes and prayers not only for our country but also for all of humanity. This is the place for the best wishes. Therefore, at the same time, we have all had the opportunity to nurture ourselves, to reassess ourselves and each of us as individuals to account for ourselves as a nation and to acknowledge our shortcomings. I believe that when we return to our country with the lessons we have taken from here, everyone, first as an individual and then as the community, will take on the duties that befall them in the best manner possible."

When asked by a reporter what he prayed for when he first saw the Kaaba, Gül responded, "This should all remain private. That is probably the best thing. Everyone should keep that in his or her own hearts. This is actually a place where there is no ostentation. That is why in Ihram everyone is equal. Over here, these sorts of things should always remain private. I am certain that everyone expressed their heartfelt wishes, desires and prayers. I hope that our other brothers and citizens will also be granted all that they desire."