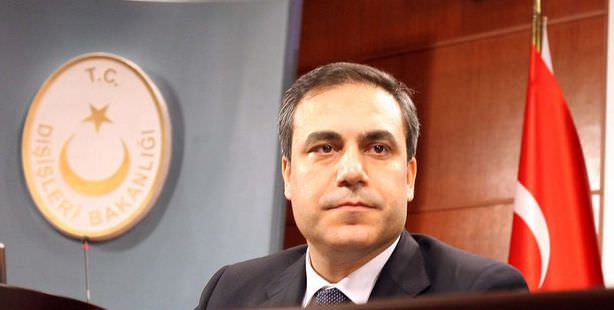 Foreign Minister Davutoğlu commented on recent articles released in major U.S. publications that cite Turkey’s intelligence chief Fidan as having disclosed sensitive intelligence to Iran as being nothing more that black propaganda and an attribution to how well he actually does his job.

Over the past week, two articles released in prominent U.S. publications point to Turkey's National Intelligence Organization (MİT) Undersecretary Hakan Fidan as being a key figure in Turkey's political sphere while also inferring that he has revealed sensitive intelligence to Iran. An article entitled, "Turkey's Spymaster Plots Own Course on Syria: Hakan Fidan Takes Independent Tack in Wake of Arab Spring" which was released in the Wall Street Journal on October 10th, claims that Fidan has passed sensitive U.S. and Israeli intelligence to Iran and is indiscriminately arming Syrian rebels while also quoting former U.S Ambassador to Turkey James Jeffrey as referring to Fidan as the new face of the Middle East.

Just yesterday, the Washington Post published an article penned by David Ignatius and entitled "Turkey blows Israel's cover for Iranian spy ring" which claims that the government disclosed the identities of up to 10 Iranians who had been meeting with Mossad case officers in Turkey. Ignatius also questions whether this may have been the reason Israeli Prime Minister Benjamin Netanyahu was so adamant in his refusal to apologize to Turkey for the May 2010 raid by Israeli forces of the Mavi Marmara flotilla delivering aid to Gaza.

Responding to reporters' questions from Ereğli, Konya, Davutoğlu stated, "The claims regarding Mr. Hakan Fidan are not only untrue, but they also indicate how perfect Fidan does his job," praising the intelligence chief for his "extraordinary efforts" in developing the intelligence agency's institutional infrastructure and increasing its capacity for intelligence gathering to protect the security of the country.

Davutoğlu also pointed out that the timing of the articles was "important," as "There are various campaigns at both an international and national level that are recently underway," said the Foreign Minister. Davutoğlu added that these campaigns are trying to discredit the government's "mission" and Turkey's rising global profile. "The claims against Hakan Fidan are not only unfounded, but also an example of a very poor black propaganda," said Davutoğlu.

In the wake of the response and criticism of the release of subsequent articles in the Wall Street Journal and the Washington Post, the U.S.-based Jewish Press also wrote an article entitled "Turkey Exposed 10 Israeli Agents in Iran," which contained an implied assassination threat directed at Turkey's intelligence chief Fidan. In the article, Yori Yanover, refers to Fidan as "basically an Iranian agent," and "a key Erdoğan man" and says, "If anyone deserves to find a special surprise in his car one morning, its Fidan, the Turkish spy chief."

Asked to comment on the Washington Post article penned by David Ignatius, U.S. State Department Spokeswoman Jen Psaki repeatedly expressed she did not want to comment on specific stories, however Psaki did say, "We work with Turkey closely. They are a close ally. We work with them on a range of issues, including counterterrorism. We are in close contact with a range of officials at all levels, including the Turkish intelligence chief (Hakan Fidan)."