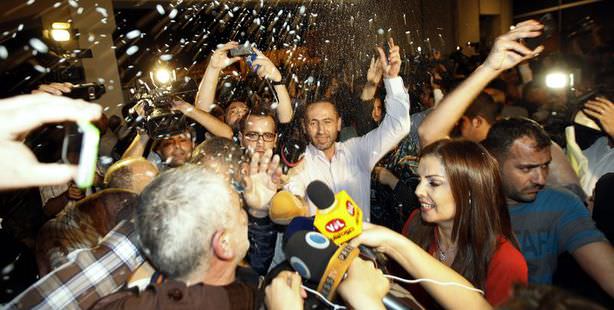 A special operations team from Turkey’s National Intelligence Organization (MİT) staged an operation in the midst of clashes in northern Syria to rescue the nine Lebanese pilgrims who had been kidnapped in May 2012 by members of the Syrian opposition. The Shiite pilgrims were part of a hostage exchange that took place late on Saturday and saw the return to Turkey of two Turkish pilots that were being held hostage in Lebanon by members of the pilgrims’ family.

SABAH has acquired the details of a secret operation staged by the Turkish National Intelligence Organization (MİT) to secure the safety of nine Lebanese hostages who were part of an exchange for the return of two Turkish Airlines pilots who were kidnapped in Beirut. The operation, which was reminiscent of an action film, placed the special operations team in the line of fire in northern Syria.

The nine Lebanese pilgrims, who were abducted by the Syrian opposition North Storm Brigade in May of 2012, were transferred to the northern city of Azaz earlier in October as part of a hostage transfer deal to secure the release of two Turkish Airlines pilots, Murat Akpinar and Murat Agca, who had been abducted by an armed group consisting of the pilgrims' family members in Beirut on August 9th, under the demand that Turkey broker the release of the Lebanese hostages. When conflict escalated in the northern Syrian town of Azaz between Al Qaeda and members of Syria's opposition, a special operations team from Turkey's National Intelligence Organization was sent in to rescue the Lebanese hostages from the conflict-ridden zone and to secure their safe entrance to Turkey.

According to information from high-level sources, Turkey not only operated on its own soil to secure the return of the two Turkish Airlines pilots, a special operations team from Turkey also conducted a secret operation in Syria.

While negotiations ensued to secure the release of the two Turkish pilots, in early October, the Syrian North Storm Brigade transferred the kidnapped pilgrims to the northern Syrian city of Azaz, located near the Turkish border. Turkey conducted a series of diplomatic traffic with members of the Syrian opposition and officials from Lebanon, Qatar and Iran in order to ensure the return of the two Turkish pilots. According to the arrangements made, the Lebanese Shiite pilgrims were supposed to be brought into Turkey during the Eid al-Adha, after which the pilots would be released. However, on October 15th, just at the time the hostage-transfer was planned to take place, clashes intensified between the North Storm Brigade and the Al-Qaeda-linked group the Islamic State of Iraq and Syria (ISIS) in Azaz.

THE PRIME MINISTER APPROVED THE OPERATION

Upon the intensified conflict in the region, it was then assessed that if the nine Lebanese pilgrims were placed in a life-threatening situation, it may not only risk the release of the Turkish hostages but also their safety. Concern escalated because the Shiite pilgrims had been placed in the line of fire as well as due to the possibility that they could fall into the hands of Al Qaeda. At that point, Turkey's National Intelligence Organization began weighing the possibility of staging an armed operation in order to secure the release of the pilgrims themselves. The decision was reached to have state leaders weigh in on the plan. The proposal was then presented to Prime Minister Recep Tayyip Erdoğan, who approved of the operation.

A team from MİT's Foreign Operations Department was sent to the Syrian border by plane on October 16. The fully equipped team proceeded to drive to the Azaz region to secure the pilgrims' safety from the region in conflict. The special ops team went straight to the location where the hostages were being kept and managed to take them out of captivity by the Syrian opposition and drove them straight into Turkey.

The special operation team from Turkey was not faced with conflict and therefore did not have to engage in a shoot-out while securing the hostages' release. The Lebanese pilgrims were brought into Turkey from the Öncüpınar Border Post and were then flown into Ankara. The entire operation transpired within a single day. The hostages were later sent to Istanbul from Ankara and on Saturday departed from Sabiha Gökçen Airport to fly into Beirut's international airport where they were greeted by crowds awaiting their return.