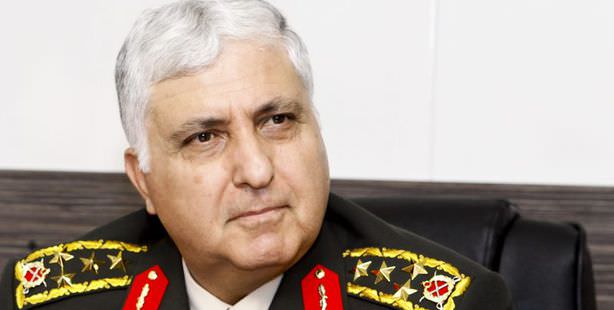 Chief of General Staff General Necdet Özel responded to criticism he has faced over his silence on recent court rulings against senior military officials on coup plotting charges.

In a written statement submitted to the AA new agency on Monday, Chief of General Staff Gen. Necdet Özel commented on recent criticism of his decision to remain silent on the recent rulings in the Sledgehammer (Balyoz) case, which charged senior-level military officials with plotting a coup on the Turkish Republic's democratically elected government.

In his statement, General Özel expressed his grief and sorrow felt by those under arrest and their families, and stated that as Chief of General Staff he closely follows all investigations involving members of the Turkish Armed Forces; however, as per his position he has chosen to remain silent on issues pertaining to the judiciary. General Özel also condemned the separatist attempts intending to sow discord amongst the Turkish Armed Forces.

General Özel expressed that due to his respect for the Turkish nation and the approaching Eid al-Adha, he chose to not respond to the October 9th ruling and stated, "However, due to the criticism that I find to be destructive and unwarranted, I feel it may be beneficial to address the public. First and foremost, I would like to emphasize that I share the grief and sorrow of our detained personnel and their valued family members. When I came to this position, the investigation, arrests, evidence collecting and indictment-preparation for the Sledgehammer (Balyoz) case had already been completed. The authorized court had accepted the indictment and the judicial process had already begun," said Özel.

Explaining that as part of his position, he closely follows and is continuously briefed on all investigations and trials pertaining to Turkish military members, Özel shared that he has been frequently subjected to criticism in his lack of public response on the verdict.

"The Chief of General Staff is the commander of the Turkish Armed Forces and a public official whose responsibility to the state and whose duties and authorities has been dictated by law. Therefore, a public official needs to correctly analyze where, when and with whom to comment," stated Gen. Özel. Expressing that it is for this reason that he has chosen to remain as silent as possible and to not take forefront on the agenda, Özel stated that he felt the need to release this statement in light of intense criticism he has received from certain suspects charged in the Sledgehammer case and their family members.

"Due to my corporate identity, I do not feel it is right for me to comment on issues that are being dealt by the judiciary nor to share my views with the public through the press. The judicial verdicts given on these types of historical cases, should be discussed by experts and the results evaluated by legislative and executive bodies and any soul-searching should be done by our great nation," said Özel.

General Özel also commented on what he referred to as separatist intentions to sow discord and cause disharmony amongst the Turkish Armed Forces through emphasizing that the suspects released were members of the Land Forces Command. On October 9, the Supreme Court of Appeals approved the convictions of 237 suspects in the Seldgehammer case and overruled the convictions of 63 other suspects on the grounds that they had not actually committed an illegality.

Özel expressed his belief that for a more harmonious , prosperous and advanced Turkey, the lessons learned from incidents that took place in the past should be realized without getting stuck on what happened and constantly revisiting such issues by placing them on the agenda. The Chief of General Staff stated that through unity and togetherness and protecting our internal harmony we need to listen to and comprehend one another and push our fixations aside and requested further sensitivity for the self-sacrificing members of the Turkish Armed Forces.