Kidnapped pilots released on Saturday share details of their ordeal 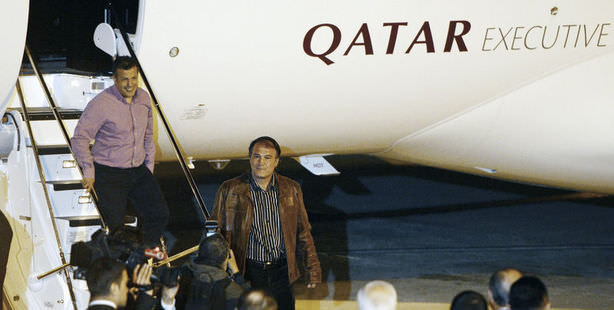 Turkish pilots Murat Akpınar and Murat Ağca revealed details of their ordeal after being abducted in Lebanon over two months ago only to be released on Saturday for an emotional homecoming, which included the pilots’ families and Prime Minister Erdoğan.

Turkish Airlines (THY) pilot Murat Akpınar and co-pilot Murat Ağca, who were abducted in Lebanon and held in captivity for 71 days returned home on Saturday to an emotional homecoming where they were greeted by Prime Minister Recep Tayyip Erdoğan as well as their families.

The two Turkish pilots were abducted in Beirut by an armed group, who ambushed a bus carrying the Turkish Airlines crew from Beirut's international airport to a hotel in the city. The group, which called itself the Zuwwar Imam al-Rid consisted of family members of nine Lebanese Shiite pilgrims that had been abducted in Syria in May 2012. Their demand was for Turkey, which they said was a strong country in the region, to secure the release of the Shiite pilgrims from Syrian rebels. The nine Lebanese hostages were also released over the weekend.

Murat Akpınar and Murat Ağca were released Saturday night and shared their ordeal with reporters as they returned to Turkey aboard a Qatari plane and then during their first day home with their families. Describing their abduction on August 9th, Akpınar said there was more action in the 90 seconds it took for them to be abducted from the transfer bus than there is in an entire Hollywood film. Akpınar said he was told later by his abductees that they had worked on the kidnapping plan for 45 days.

'THEY HELD A GUN TO OUR HEADS'

Murat Ağca described the abduction, which he said took place on the transfer vehicle that, was taking the six-member Turkish Airlines crew to their hotel in the Lebanese capital, by stating, "Within a minute and a half of being aboard the vehicle, it braked suddenly. It then went approximately 100 meters further and then stopped completely. It was then I saw that there was group of about ten armed men who were holding Kalashnikovs and guns. They were wearing black masks and were yelling in Arabic as they approached the vehicle. We were shocked and did not know what we were going to do. They kicked in the door of the bus and held a gun to the driver's head. They then pointed guns at all of us and entered the vehicle. It was at that point that our driver yelled, "Do not shoot." They took the driver and then they took me with them. They were holding 10,000-volt tasers. If we had resisted they would have most likely used the electric shock instruments. They blindfolded us and took us to a home. As soon as we entered, they told us to get down on our knees. They pressed my head down to the ground and held a gun to my head. At that point, they brought the driver in. They then proceeded to offer us fruit and chocolate," explained Ağca adding that the gunmen said they would not hurt them and would only be holding them captive for a few days.

However, pilot Murat Akpınar says that as the days passed they realized the issue was not as simple as they had hoped. Describing their ordeal as being reminiscent of being kidnapped eight times, Akpinar explains that they were constantly taken to new locations and mainly between the hours of 2-4 am.
"We made certain decisions that first night. 1) That we would stay alive. 2) That we would stay healthy. 3) That we would maintain a healthy metal outlook and 4) that we would stay true to the previous three rules. They just wanted to save their father. One of them said something that I appreciated. He said, 'Lions live alone, they live in their own country and die on their own land. My father is not a fox nor a jackal.' They liked us and they liked Turks. They were under much more stress than we were," said Akpınar adding that they suffered no physical harm during their captivity. "They are watching me now," said Akpınar. "They told us they would be. Hopefully, from here on out everyone will be able to spend the Feast of Sacrifice holiday with their families as lions."

Co-pilot Murat Ağca explains that one of their abductors who spoke English told them that members of their family had been abducted and that they needed help from Turkey, which is a strong nation, to mediate on their behalf because their own country had failed to do so. "They told us they just needed us for two to three days and then they would set us free. We had to change locations every three days and each time we were scared for our lives, fearing being caught up in armed combat."

Ağca said that the Turkish State offered them the greatest sense of security during their captivity, and shared that every day they would pace back and forth in a 37-step-long garden in order to try to maintain their health and sanity. "When a state official would call us we were extremely pleased however our abductors were 120 times more pleased. We waited in patience for our government to save us." Ağca also stated that they had no idea Prime Minister Recep Tayyip Erdoğan would be at the airport to greet them upon their arrival. "It was a complete surprise," said Ağca.

Explaining that he had only met pilot Murat Akpınar on the flight before their abduction, Ağca says that it was listening to a Turkish radio program that helped them hold on to their hope and keep their spirits high. While in captivity, they mostly consumed take out chicken, the pilots explained, adding that it took 60 days before they were able to eat with a fork, because their abductors were unfamiliar with utensils.