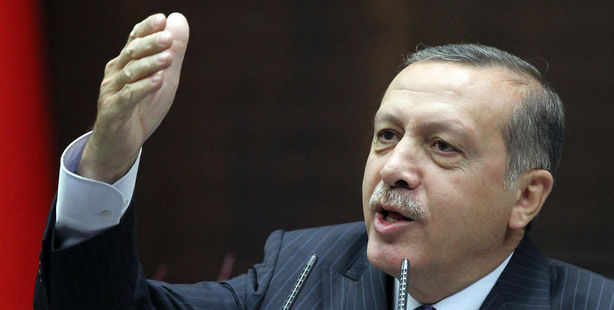 Prime Minister Erdoğan addressed AK Party group members at the assembly on Tuesday during which he commented on Turkey’s pressing agenda including the EU, Syria, the Marmaray project and demonstrations in Ankara.

Prime Minister Recep Tayyip Erdoğan addressed ruling Justice and Development (AK) Party members at an assembly group meeting on Tuesday, during which he said that Turkey is no longer the country it once was and now has a voice.

Prime Minister Erdoğan delivered a series of pertinent messages in his address on Tuesday, during which he commented on a number of pressing items on Turkey's agenda, including the recently released EU progress report, the Marmaray project, the release of two kidnapped Turkish pilots, the situation in Syria and recent protests against development in the capital.

"Just as there is benediction to being a great nation, from time to time there are also great expenses. However, those who fear those expenses will never acquire benediction. As Turkey's influence in the region increases, those who are unable to stand it will always target Turkey," said Erdoğan.

The Prime Minister pointed out that there will be both national and international efforts to prevent Turkey's growth and establishing harmony, however, he said, Turkey is engaged in an intense legal and diplomatic struggle against those who protect terrorist organizations. "Turkey is not a country that can be operated on," stated Erdoğan, adding, "Turkey is not the Turkey it once was. Turkey now has a voice."

The campaigns being staged from both within and outside of the country cannot harm this new Turkey, said Erdoğan, emphasizing that they will continue to stand by the oppressed rather than the tyrants and said they will never bow down to anyone's dark scenarios.

Prime Minister Erdoğan commented on the release of two kidnapped Turkish pilots on Saturday by stating, "After long and intense efforts, our two Turkish pilots that were abducted in Lebanon have been released. We managed to save our pilots even though certain broadcasts made by a number of politicians and media establishments who did not pay heed to the sensitivity of the situation made it even more difficult to do so."

Although Prime Minister Erdoğan dished up criticism of the EU for not yet taking a stance on the massacres unfolding in Syria and for refraining from showing the courage to call the coup in Egypt what it is, he did state that even though the EU Commission Progress Report on Turkey contained certain incorrect items, it did confirm Turkey's determination.

Modern bandits at play in METU

Prime Minister Erdoğan also commented on recent attempts to obstruct a road development project at Ankara's Middle East Technical University (ODTÜ). Assuring that they will continue their struggle with determination, Erdoğan stated, "In the past bandits used to cut off roads, now, we have modern bandits. Whoever attempts to block our road will witness our volition of steel."

MARMARAY TO OPEN ON TUESDAY

Erdoğan also announced that the highly anticipated Marmaray under-sea tunnel project will be opening next week and stated, "Istanbul's 122-year-old dream, the Marmaray, is complete. We will be holding an opening ceremony for the project on Tuesday. We serve the demotic and not the individual. You uproot 200,000 trees and plant five million in their place, this is what we do."