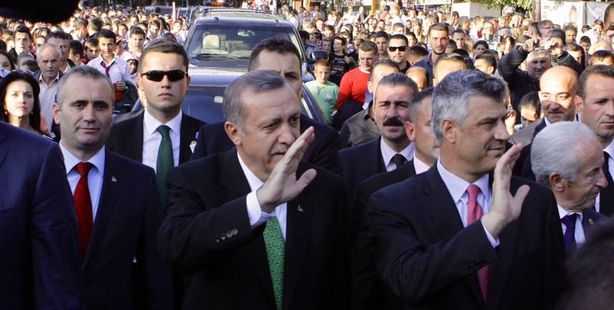 Welcomed by crowds upon his arrival to the city of Prizren, Prime Minister Erdoğan stated, “Turkey is Kosovo and Kosovo is Turkey. We are as close to one another as our National Anthem.”

Prime Minister Recep Tayyip Erdoğan's one-day trip to Kosovo on Wednesday quite literally turned onto a show of force as crowds flocked to the streets to witness the historical visit. Erdoğan made a trip to Prizren, where the majority of residents speak Turkish, and the city, which was decked out with red and white Turkish flags, celebrated the momentous occasion. Schools went on holiday for the Prime Minister's visit and all of the city's residents flocked to the streets to welcome his arrival. When they arrived to Prizren, Prime Minister Erdoğan, Kosovan Prime Minister Hashim Thaci and Albanian Prime Minister Edi Rama, exited their vehicles and proceed to walk side by side down the main street of the town amongst widespread displays of affection from local residents.

Greeting the public as he walked along the main avenue to chants in support of Turkey from locals, Prime Minister Erdoğan made his way to Şadırvan Square where a rally was held for the three Prime Ministers. Taking to the pulpit after his two counterparts, Prime Minister Erdoğan stated, "Turkey is Kosovo as Kosovo is Turkey. We are so close to one another that the poet who penned turkey's National Anthem hails from Kosovo. There is no other poetic anthem that describes the Turks' independence, love of liberty, heroicness and its broad horizons as beautifully. That magnificent poem, which ties us together as a single nation and draws us closer, was written by the reflective Mehmet Akif Ersoy, the father of verses who happens to be an Istanbullu whose roots are Kosovan. We are as close to one another as our National Anthem."

Addressing the crowds that gathered in Prizren's main square, Erdoğan added "As the people of this region, we built our past together. As our ancestors did once, we will continue to build the future together."

During his time in Prizren, Prime Minister Erdoğan also met with his friend Hacı İlyas Uki and later visited the Turkish Union, which is housed in Kosovo as part of the NATO Peace Force, where he attended a working meal in his honor, after which he returned to Turkey.