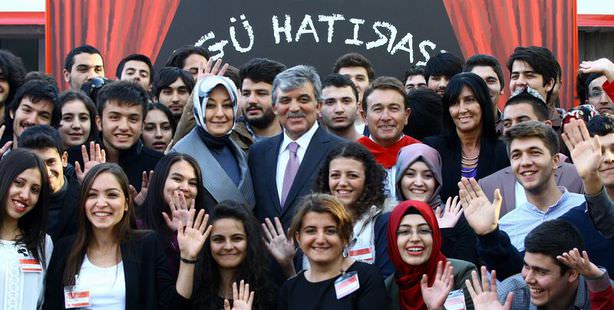 President called for a resolution draft on higher education that will pose rooted reforms during an address at his eponymous university in Kayseri.

President Abdullah Gül attended the opening of the 2013-2014 school year at the Abdullah Gül University in Kayseri on Friday, during which he called on the Higher Education Board, the Assembly and the government to stage rooted reforms in higher education by stating, "The time has now come for university reforms."

Highlighting that while Turkey has undergone a number of significant reforms in a variety of areas, President Gül emphasized that reforms on higher education should no longer be delayed. Drawing attention to the fact that priority is placed on the labor force in the development of a nation, Gül said that education was mandatory in order to do so.

Pointing out that the largest share of the budget is devoted to education, President Gül called for the urgent release of reforms that have been included in a higher education draft resolution which has been passed on to the Prime Ministry. "University reforms need to be prepared with intense care and should be done according to the necessities. "While Turkey is making profound reforms in a number of areas, the reform process for higher education should not be delayed. Our Higher Education Board especially as well as the Assembly and our government should not postpone these reforms. The time for university reforms has come," stated Gül.

During his tour of the campus, President Gül also had the opportunity to speak with students at the university during which he recalled how he also stayed in a dormitory with 12 students to a room and stated, "You are all very lucky. Be well aware of the value of these opportunities."

The newly revised National Anthem, amended by order of Abdullah Gül was also played for the first time at yesterday's official opening ceremony.

Gül responded to a reporter's question regarding the weekly meeting held between Prime Minister Recep Tayyip Erdoğan and President Gül during which they were accompanied by their wives. "We get together from time to time as families. This is well-known by the public. Yesterday thankfully we had this type of visit. Not only did we get to talk about the issues we discuss amongst ourselves, but we also had the opportunity to share time as families and old friends in a family environment."

This is a translation of an article originally written by Yaşar Özay and Safure Canturk.