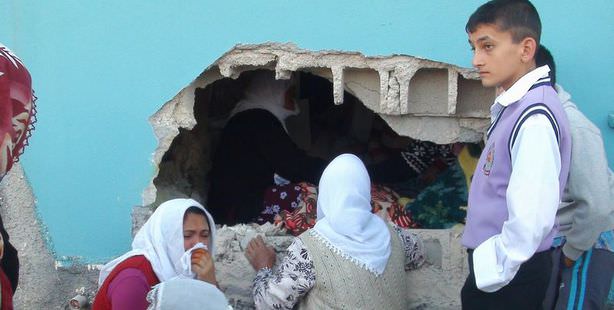 A mortar fired from Syria struck a home in the frontier town of Ceylanpınar killing a 33-year-old father and injuring his daughter. Schools have been closed for the day and security measures increased along the border.

According to the information obtained, a stray mortar fired from across the Syria border struck a home in the Mehmet Akif Ersoy neighborhood of Şanlıurfa's Ceylanpınar district, in the early morning hours of Monday.

İdris Akgül (33) was at home when the mortar struck and died at the scene, while his daughter Derya was injured. Derya Akgül was immediately hospitalized and is said to be in stable condition.

The mortar was suspected to have been the result of stray fire from the Syrian town of Ras al-Ayn, located across the border from Ceylanpınar, where clashes have been ongoing between the PKK-affiliated Democratic Union Party (PYD) and al-Nusra.

Sounds of firing from the Ras al-Ayn district can still be heard.

Schools in Şanlıurfa's Ceylanpınar district have been shut down for the day as a result of the intense violent clashes in Ras al-Ayn.

Conflict has been ongoing between fighters from the People's Protection Units (YPG), the armed wing of the PYD, and al-Nusra for three days now resulting in increased concern in Ceylanpınar. The violent clashes, which intensify at night, continue with reciprocal mortar and cannon fire being heard across the border in Turkey.

Ceylanpınar residents say they are at unease in their homes to h incessant sounds of firing. Meanwhile, security measures have been increased along the border.

Turkey's bordering towns have experienced numerous instances of stray fire from clashes in Syria's Ras al-Ayn, with a significant number resulting in casualties.