Normalization in Turkey reaps an end to an impertinent prohibition 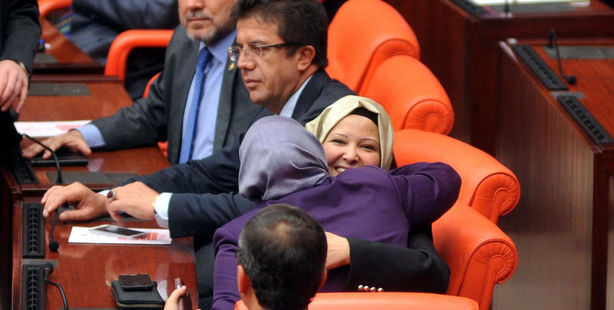 Four parliamentarians from the ruling Justice and Development (AK) Party entered the Assembly wearing headscarves on Thursday in a move marking the first time Turkish lawmakers have been able to attend a Turkish parliamentary session in the manner of dress in which they choose without inciting tension in decades.

AK Party Denizli Deputy Nurcan Dalbudak, Konya Deputy Gülay Samancı, Mardin Deputy Gönül Bekin Şahkulubey and Kahramanmaraş Deputy Sevde Beyazıt Kaçar became the first female lawmakers to don headscarves in a historical parliamentary session held at Turkey's Grand National Assembly on Thursday, since a series of reforms recently introduced in a democratization package have set a new precedent on freedom of dress. The restrictions on wearing headscarves in civil positions were recently lifted as part of a series of progressive reforms introduced in a new democratization package. The four female lawmakers in question chose to exercise their right to wear a headscarf in parliament upon their return from having completed the hajj pilgrimage.

The last time a female parliamentarian entered the assembly wearing a headscarf was in 1999 when Merve Kavakçı, who was elected as Istanbul Deputy for the Virtue Party (Fazilet Party), was prevented from taking her parliamentary oath due to harsh objection by the Democratic Left Party to her choice to exercise her right to dress in the manner she prefers. Later, Kavakçı was also stripped of Turkish citizenship based on the grounds that she was a U.S. citizen.

A NEW PRECEDENT IS SET IN TURKEY'S ASSEMBLY

Commenting on the new precedent set in Turkey's Assembly today, AK Party Antalya Deputy Mevlüt Çavuşoğlu announced on his Twitter account, "This is a historical day in Turkey's Grand National Assembly. Turkey is on the road to normalization." European Union Minister and Chief Negotiator Egemen Bağış also remarked on the move on Twitter by stating, "Our women, who were once excluded from universities and award ceremonies, are now in Turkey's greatest office the Grand National Assembly. Congratulations Turkey!"

On Thursday, Deputy Prime Minister Bülent Arınç stated, "We will no longer interrogate women based on what they wear. It is the most foolish thing in the world to categorize women based on whether or not they wear headscarves." Arınç recalled how 14 years ago, when Merve Kavakçı entered the Assembly wearing a headscarf what followed were disputes that were unbefitting to Turkey's parliament and stated, "It is now 14 years later and I want to forget the statements made by Mr. Demirel and Mr. Ecevit at that time. That event resulted in political ramifications. Those who yelled (at Kavakçı) to leave the assembly are now all on the outside themselves," stated Arınç adding that his family suffered greatly due to the restrictions placed on wearing headscarves in universities. "We didn't revolt and never considered going up in the mountains. It seems what was needed was a lot of patience. Turkey has now reached such a point that all of these sorts of prohibitions need to be lifted. There are certain inequalities and misunderstandings and we need to correct them all. I believe we can come together to find a way to reach a solution," stated Arınç.

Deputy Prime Minister Bekir Bozdağ also commented on the new precedent set today in Turkey's parliament by pointing out that a dark era has come to an end and a dark page has been turned today. "The freedom to dress in the manner one chooses which was allowed today in the assembly is the most concrete indicator of change and democratization in Turkey. The freedom of dress granted in the parliament today is the end of the injustice and discrimination, which has been dealt to women for years. Women have now attained equality," stated Bozdağ.

A recent survey conducted by MAK Consulting which focused on the public opinion regarding the freedom to wear a headscarf, shows that 72% were in favor of headscarf-wearing parliamentarians attending the assembly. While 19% were against such a reform, 9% said they were undecided. When asked whether public servants should be allowed to wear headscarves in their line of duty, 74% stated 'yes', while just 16% remained opposed. The headscarf debate has been one of the most contentious issues in Turkey's politics and one that spans back to a regulation established in 1982 banning the wearing of headscarves by female personnel in public institutions, which was followed two-years later, in 1984 by a ban prohibiting the wearing of headscarves in universities.