A historical day in Turkey’s parliament 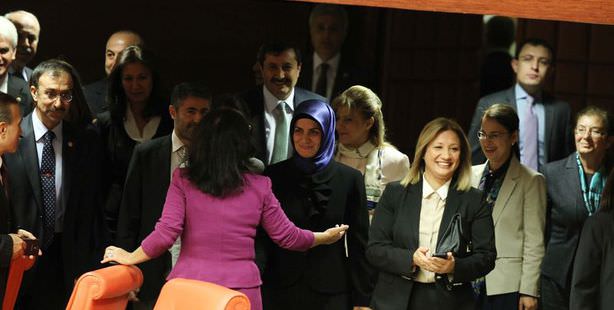 Turkey’s Assembly embarked on a whole new era yesterday, when four lawmakers from the ruling Justice and Development (AK) Party entered parliament wearing headscarves. The move was welcomed by Prime Minister Erdoğan in address to the nation Thursday night as well as by President Gül in statements made Friday. Speaker of the Parliament Cemil Çiçek thanked fellow parliamentarians for their exhibition of democratic maturity.

Turkey's Assembly experienced a historical day on Thursday as a critical threshold spanning back 14 years to the headscarf crisis experienced in the parliament during Prime Minister Bülent Ecevit's rule was finally overcome through the attendance of four lawmakers wearing headscarves in yesterday's General Assembly.

AK Party Denizli Deputy Nurcan Dalbudak, Konya Deputy Gülay Samancı, Mardin Deputy Gönül Bekin Şahkulubey and Kahramanmaraş Deputy Sevde Beyazıt Kaçar became the first female lawmakers to don headscarves in a historical parliamentary session held at Turkey's Grand National Assembly on Thursday, since a series of reforms recently introduced in a democratization package have set a new precedent on freedom of dress. The General Assembly proceeded without any overt tension and deputies applauded their fellow lawmakers for choosing to exercise their rights, marking the end of a decades-old prohibition of wearing headscarves in parliament.

The last time a female parliamentarian entered the assembly wearing a headscarf was in 1999 when Merve Kavakçı, who was elected as Istanbul Deputy for the Virtue Party (Fazilet Party), was prevented from taking her parliamentary oath due to harsh objection by the Democratic Left Party to her choice to exercise her right to dress in the manner she prefers. Prime Minister Recep Tayyip Erdoğan praised the Assembly for turning a new page in democratic reforms in an address to the nation televised Thursday night and on Friday; President Abdullah Gül thanked all of the nation's political parties for contributing to the normalizing of Turkey. Turkey's main opposition Republican People's Party (CHP) refrained from contesting the development, which was also supported by opposition parties National Movement Party (MHP) and the Peace and Democracy Party (BDP).

President Gül spoke to reporters prior to his departure for Edinburgh where he will attend a Turkish-British forum, during which he commented on the new precedent set in Turkey's Assembly yesterday by stating, "As you can see, everyone was pleased. Everyone had a part in contributing to this form of normalization. In this regard, I want to thank all of our political parties."

In addition to addressing the reforms brought on by the recently released democracy package as well as pledging new reforms to come on Thursday night in an address to the nation, Prime Minister Erdoğan also commented on Friday on the historical turn taken in the Turkish parliament yesterday by stating, "On behalf of my nation as well as personally, I would like to thank the groups and deputies for their support in the Parliament. Of course, this atmosphere, as a historical atmosphere, I perceive to be an important step in the democratization process. The parliament assessed this process with an unprecedented, practically never-seen maturity," said Erdoğan.

Parliament Speaker Cemil Çiçek also thanked all of the party and group administrators in the Assembly for their display of democratic maturity and referred to the development as being a significant indication of the progress Turkey has achieved in its democracy. "Turkey's Grand National Assembly realized a discourse in its own history that is befitting of its historical character and dignity," stated Çiçek.

CHP Group Deputy Chairman Muharrem İnce took the pulpit during yesterday's Assembly session to state that headscarves should not be made a debate regarding liberties and said, "The women who wear headscarves are our sisters just as those who do not," which was received with applause by both CHP and AK Party deputies.

BDP Group Deputy Chairman Pervin Buldan congratulated the parties for not turning the event into one reminiscent of what transpired with Merve Kavakçı 14 years ago and stated, "Men should not interfere in what we wear."

MHP Deputy Chairman Ruhsar Demirel stated, "This is an "ordinary" day in parliament for MHP. In our opinion, there is mobbing taking place in the name of liberties." Demirel asked for a "little empathy" and stated that her party refuses to judge people based on what they wear.

CHP leader Kemal Kılıçdaroğlu responded to reporters in the evening for a dinner held with female deputies from his party during which he stated, "I am very happy today. I want to thank all of our deputies that spoke today from the bottom of my heart."

Also of note, BDP Deputy Sırrı Sakık placed a photograph taken of Merve Kavakçı in parliament on his row for yesterday's Assembly session.