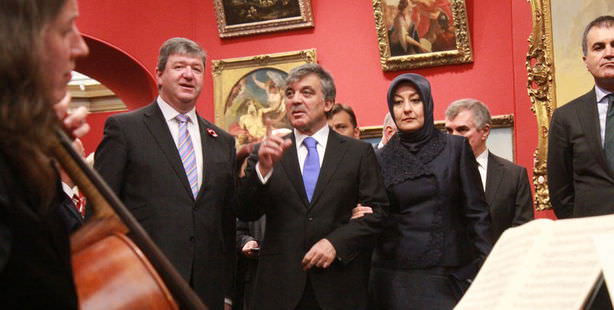 In an exclusive interview from Scotland with the , President Gül discussed the threat of Syria turning into another Afghanistan due to the lack of interest by the international community. Guardian

During an official visit to Scotland, President Abdullah Gül provided an exclusive interview to The Guardian during which he addressed the increasing radicalization in Syria as a result of the incessant civil war and increasing presence of jihadist groups which he says poses a risk for the nation becoming a new Afghanistan situated along the Mediterranean shore.

President Gül, who arrived to Edinburgh over the weekend to attend a Turkish-British Forum, was also hosted by Prince Andrew at a dinner held in his honor during which he provided a candid interview on the crisis in Syria. President Gül emphasized the fact that Syria is being destroyed in front of the very eyes of the unheeding international community and stated that the response of the international community, including the U.S. and England, to the moral, humanitarian and security crisis in Syria has been very disappointing. Reiterating his stance, Gül underlined his view that the UN Security Council's approach has been a "disgrace."

Gül mentioned that Turkey's efforts at mediation and reaching a peaceful solution to the crisis in Syria two years ago were not supported and even thwarted by Western powers. When asked whether his country would respond if targeted, President Gül stated that Turkey would respond militarily, "in the strongest way possible."

Gül assured that there is no question regarding whether Turkey would retaliate in full and stated, "We have already given authority to the Turkish Armed Forces in this respect." However, this is not a bilateral issue between Turkey and Syria, Gül pointed out, adding that they had no issues with Syria prior to its engaging in human rights violations. "When those human rights violations begun to occur and there was massacring of the people of Syria, then it become a matter for mankind, for us all and the international community," said Gül.

Turkey has spent two billion dollars up until now on hosting over half a million Syrian refugees and will continue to do so, stated President Gül, adding that if the situation continues as it is today, then the civil war will only intensify and the civilian public will become further radicalized. "This poses a danger and threat not just for Turkey but is also an issue for everyone. I do not think anybody would tolerate the presence of something like Afghanistan on the shores of the Mediterranean." President Gül also commented that Turkey's expectation of the situation differs from England and expressed grave disappointment that the situation in Syria has now been reduced to rhetoric over chemical weapons.

President Gül also expressed scant hope that the upcoming Geneva II conference will achieve a "breakthrough" and stated, "The country is destroyed … There really isn't in my opinion much that can be done now."

During his stay in Edinburgh over the weekend, President Gül was joined by First Lady Hayrünnisa Gül at a gala dinner held at the Scotland National Gallery in honor of the Turkish-British 3rd Tatlıdil (Sweet Tongue) Forum.

According to information posted on the Presidential website, the Gül couple was joined by the UK'S Scottish Minister Alistair Carmichael, Turkish-British Tatlıdil Forum co-chair Jack Straw and his wife as well as Turkey's Ambassador to London Ünal Çeviköz and his wife.