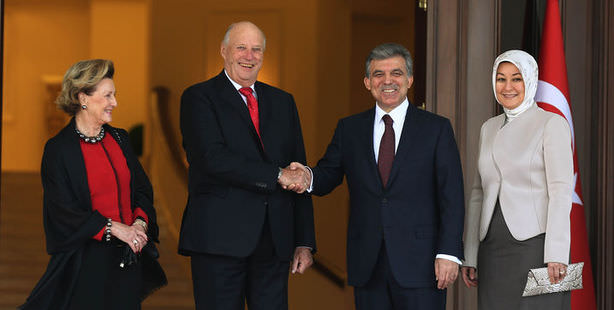 President Gül hosted Norwegian King Harald V at the Çankaya Palace in Ankara on Tuesday, during which he expressed Turkey’s determined resolve to successfully complete negotiations for full EU membership.

President Abdullah Gül hosted Norwegian King Harald V on Tuesday at the Çankaya Palace in Ankara. Marking the trip as the first official visit by a Norwegian State leader, King Harald arrived to Turkey as a special guest of President Gül. The two held a joint press conference after meeting at the Çankaya Palace. The meeting coincided with the opening of Chapter 22 in Turkey's EU accession bid at an Inter-governmental Conference held the same day. Commenting on the event, which put an end to an over three-year hiatus in Turkey's EU accession process, President Gil stated, "Turkey's objective is to successfully complete negotiations for its bid for full EU membership. Later, the Turkish public may want to be like Norway. However, EU member nations should not obstruct the negotiations process. We will continue to be strongly tied to our targets."

In return, King Harald offered his full support for Turkey's efforts to draft a new Constitution. Meanwhile, King of Norway Harald and President Gül presented one another with mutual 'State Medals'. Later in the evening, a dinner was held in honor of the Norwegian King and his wife at the Çankaya Palace. During the dinner, Gül expressed that Turkey considers Norway to be one of their fundamental partners in issues of peace and negotiation. "As NATO allies, Turkey and Norway have both provided significant contributions to European security," said Gül. King Harald stated, "Turkey has honorable objectives and ambitions when it comes to democracy."

THE KING TO COOK DINNER

Norwegian King Harald V will be cooking a very special meal for the Gül couple in a reception to be held in Istanbul today. The King will be personally preparing a very special dish of Norwegian's famous mackerel in the kitchen of the Çırağan Palace. Turkish students will also be preparing a special dish accompanied by both Turkish and Norwegian chefs as part of a project geared towards promoting seafood products between the nations.