Turkey welcomes opening of Chapter 22 with the EU 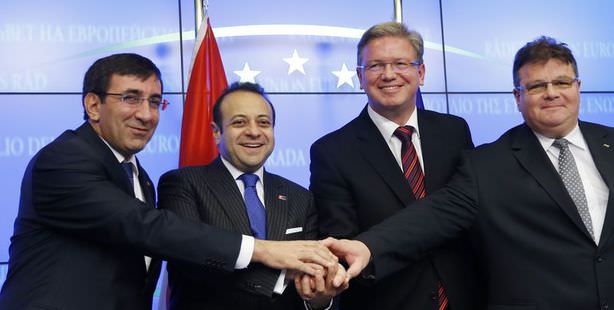 After a nearly three-and-a-half year hiatus, the EU has opened Turkey’s 14th chapter, Chapter 22 on “Regional Policy”, at an Inter-governmental Accession Conference held on Tuesday. Turkey’s Foreign Ministry welcomed the development, releasing an announcement stating, “Our expectations are for all chapters to be opened.”

Following the accession conference held yesterday, in which the 14th chapter in Turkey's EU accession bid was opened after an approximately three-year hiatus, Bağış, Yılmaz, Linkevicius and Füle took part in a joint press conference.

EU Term President Lithuania's Foreign Minister Linas Linkevicius expressed how pleased they were to be opening a chapter to negotiations after a three-year hiatus in what he said was the recording of official progress in Turkey's EU membership bid. EU Commissioner for Enlargement Stefan Füle drew attention to the fact that the developments that have transpired over the past year in Turkey exhibit how important it is that the EU and Turkey, which he said was an important partner of the EU, engage in closer relations. "Hopefully, we will not have to wait this long to open another chapter and the EU will soon openly present what Turkey needs to fulfill for chapters 23 and 24," stated Füle.

EU Minister Bağış emphasized that the EU needs Turkey at least as much as Turkey needs the EU and stated, "The EU should not consider Turkey to be a burden." Development Minister Yılmaz requested the blocking of certain chapters to be lifted in order for Turkey to continue its EU process in a faster manner.

'A CONTRIBUTION TO THE RESOLUTION PROCESS'

Referring to the opening of Turkey's 14th chapter as a "milestone in EU relations, EU Minister Bağış commented on what the reflections on Turkey will be through the opening of this chapter on regional policy.

"With the regional projects that will be developed, women and youth will be increasingly and more effectively included in our workforce. There will be an increase in the rate of girls' schooling. Vocational training will be provided for our citizens of all ages, genders and ethnicities. Individuals necessitating special care will also be ensured contribution to the work environment. This chapter will not only eradicate the diversities in development but will also provide motivation supporting interregional coalescence. It will also provide significant contributions to the resolution process," stated Bağış.

Turkey's Foreign Ministry also welcomed the opening of a new chapter in a statement released on Tuesday, which said the opening of this chapter was an important first step in the revitalization of the negotiation process. "Our primary expectation is for the blockages placed on chapters that have been obstructed due to political motives be lifted immediately to allow for the opening of all other chapters," added the statement.

A FOURSOME SUMMIT WITH THE EU

Prime Minister Recep Tayyip Erdoğan is expected to hold a quartet summit with EU Council President Herman Van Rompuy, EU Commission President Jose Manuel Barroso and European Parliament President Martin Schulz in Brussels at the start of next year. Mentioning the Prime Minister's upcoming plans, EU Minister and Chief Negotiator Egemen Bağış stated, "I believe from the bottom of my heart that as a result of this meeting, a whole new level will be reached in Turkey-EU relations." Erdoğan is also scheduled to take part in the official opening of the EU Permanent Representation building recently purchased by Turkey in Brussels as well as to take part in a summit held by the TÜMSİAD Business Association with the participation of 3,000 investors from throughout Europe.