PM Erdoğan: “Our guarantee is our public” 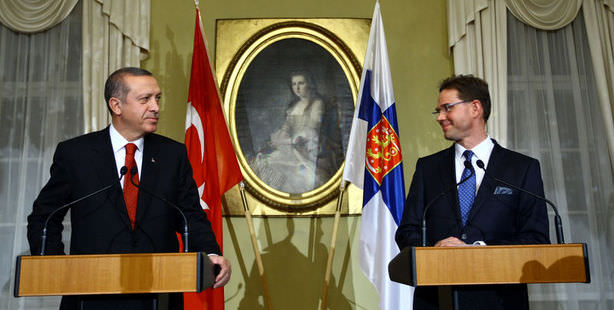 Prime Minister Erdoğan responded to a Finnish journalist’s questions regarding the debate on the co-habituating of female and male students by stating, “We have never intervened in anyone’s personal lives. If we had done so, we would not have garnered the votes of one out of every two people.”

During an official visit to Finland, Prime Minister Recep Tayyip Erdoğan responded to the ongoing debate regarding the co-habiting of female and male students due to the lack of dormitory space by stating, "The private lives of our public are under our guarantee."

In reference to criticism regarding the Prime Minister's comments earlier this week in which he criticized the co-habiting of female and male students and stated that as the government they cannot neglect complaints coming in from neighbors, Erdoğan stated. "We have never intervened in anyone's personal lives. If we had done so, we would not have garnered the votes of one out of every two people."

Erdoğan met with the Finnish Prime Minister Jyrki Tapani Katainen after which the two held a press conference. When asked to comment on criticism his government is intervening in citizen's private lives, Erdoğan responded, "I have been the prime minister for 11 years and served as municipal mayor for four-and-a-half years. We have not intervened in anyone's private lives up until now. If we had, we would not have been able to garner the votes of one out of every two people. Our public is our greatest guarantee on this issue as is the point we have reached as being the rising leading party for three consecutive terms."

Prime Minister Erdoğan reiterated that the private lives of the Turkish public is under their guaranty, "However," he stated, there is a legitimate way to live and an illegitimate way to live and at that point, of course there are duties that befall us in this nation. We have to take steps in accordance to the duties that befall us according to the laws," stated Erdoğan.

Speaking at a Turkey-Finland Business Forum, Prime Minister Erdoğan reminded that Turkey is currently in negotiations for full EU membership, however, its citizens are still required to obtain visas to visit EU nations and stated, "Latin American nations have absolutely nothing to do with the EU, yet despite this fact they are exempt from visas, whereas Turkey, which is in accession negotiations, is still required to obtain visas. This saddens us."

Emphasizing that millions of Turks already reside in Europe, Erdoğan stated, "We are already there and have integrated." Mentioning that Turkey has been waiting at the EU's door for 50 years now, Erdoğan stated, "You will see that from an economic standpoint as well as in terms of basic rights and liberties Turkey has progressed much further that certain EU member nations and is much more qualified according to EU legal acquis." Prime Minister Erdoğan also took the opportunity to thank Finland for their support for Turkey's EU accession process.