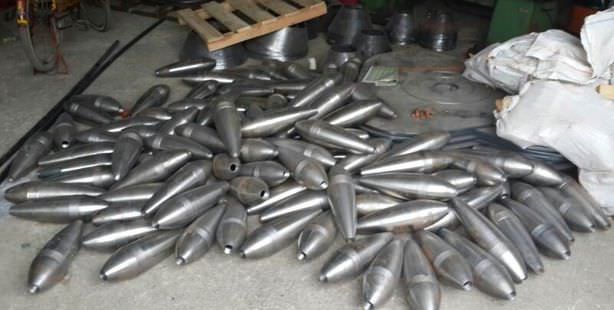 Turkish police have seized a truck loaded with rockets, missiles, explosives and weapons in the southeastern province of Adana, which is located near the Syrian border. Police have taken the driver of the lorry into custody and have staged a wide-scale investigation into the incident.

Responding to a tip on a large-scale narcotics transfer, Adana Police Department units raided a lorry carrying a variety of weapons that was headed to a firm located in the Metal Industry Zone. Police were tracking a lorry with a license registered to the central Anatolian province of Konya in connection to the tip and stopped the truck as it entered the industrial zone. Dogs were brought in to search the truck for narcotics, however, when police opened the trailer they discovered the truck was loaded with a wide variety of weapons. Reports say the truck bed was carrying explosives including rockets, missiles, hand grenades and a wide variety of weapons. Wide security measures were taken to secure the area as anti-terrorism and bomb squad teams escorted the truck to the Şakirpaşa Police Department. The driver of the vehicle was detained and a widespread investigation was opened into the incident.

Adana Governor Çoş: "We know they were not going to be used in Turkey"

Adana Governor Hüseyin Avni Coş commented on the confiscation of an arms arsenal from a truck, which he said included 1,200 rocket warheads, by stating that an investigation is ongoing and security forces are doing everything necessary to bring the perpetrators to justice.

When asked to comment on whether they had information on where the weapons were being transferred to and whether an illegal organization was involved, Governor Coş stated, "Most likely, these weapons were going to be transported out of the border, in other words, we know that they were not going to be used in Turkey. However, we are receiving a variety of information regarding where these weapons were headed. That information is not yet clear. These are not humanitarian needs. Due to the fact that these items are a variety of munitions, means they were most likely destined for certain organizations or states."

Mentioning that the raid was conducted by police forces upon receiving a tip that the truck was carrying narcotics, Coş stated that instead they ended up seizing a significant amount of weapons and are now taking all legal measures. "We have received information that the truck passed through Konya. We have not confirmed a specific organization or name responsible for the transfer, however, what this situation shows is that Turkey is exhibiting a determined stance against illegal organizations and especially those operating in our surroundings. This also proves that the necessary sensitivity is shown and the intelligence received is evaluated in order to ensure that no situation constituting a crime is allowed to transpire. Through this situation, Turkey has exhibited that it is not a country in which those wanting to commit a crime or violate the notion of human rights will be able to benefit from."