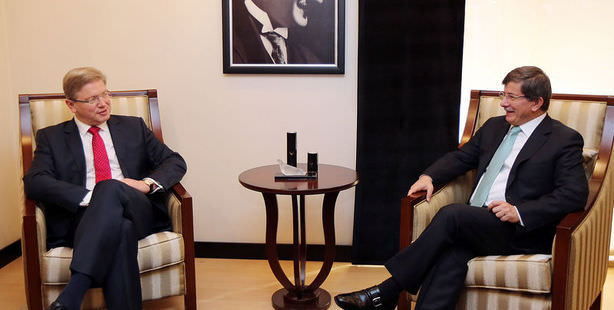 A roadmap that will open the door to visa-free travel for Turkish citizens to EU nations will soon be drawn up and is expected to be announced in the upcoming weeks, according to signals released by European Union Commissioner for Enlargement and Neighborhood Policies Stefan Füle, who met with Foreign Minister Ahmet Davutoğlu on Friday in Ankara.

Foreign Minister Ahmet Davutoğlu hosted European Union Commissioner for Enlargement and Neighborhood Policies Stefan Füle in Ankara on Friday to discuss the country's EU accession process, which has gained momentum through Tuesday's opening of Chapter 22 on regional policy and the coordination of structural instruments in Brussels. A joint announcement issued by Davutoğlu and Füle, gave out positive signals on the possibility of soon eliminating visa requirements for Turkish nationals.

Füle expressed his hopes for progress to be made by the end of the year in visa liberalization for Turks to the EU in his remarks on Friday following a meeting with Foreign Minister Davutoğlu in the capital. Emphasizing that important ground was made on the issue of launching dialogue on visa exemption for Turkish citizens and the EU-Turkey readmission agreement, Füle stated, "I hope before the end of this year there will be tangible results that will benefit Turkish citizens. I hope that in a couple of weeks we can get the results of our concentrated efforts on this issue."

Davutoğlu also emphasized the progress made between the EU and Turkey on the issue of accelerating visa liberalization for Turks in EU nations and the readmission agreement and stated, "We hope that in the next couple of weeks, certain definitive steps will be taken to determine the stages to follow."

The roadmap that will be announced in the days to come will include a list of steps to be initiated by Turkey in order to be allowed eventual visa-free travel to EU nations. This list of tasks will include ensuring integrated border management, additional control mechanisms at border crossings, visa-checking procedures being made in line with EU standards and increased preventative measures against illegal immigrations. Once Turkey has fulfilled the designated requirements, the European Commission will relay their affirmative stance to the EU Council, which will ultimately decide. It is expected to take at least five years for visa regulations for Turkish nationals travelling to EU member nations to be lifted.

EU Minister Egemen Bağış also commented on the visa requirements in place for Turkish citizens by stating, "The 1980 coup is Turkey's unfortunate legacy. While the leftist and rightist conflict ensued at that time, the coup administration wanted visa regulations to be implemented to curb those attempting to escape the nation for Europe. Our government is now nearing the point of lifting those regulations that were set in place at that time."