“Atatürk unified all of the diverse colors of this nation” 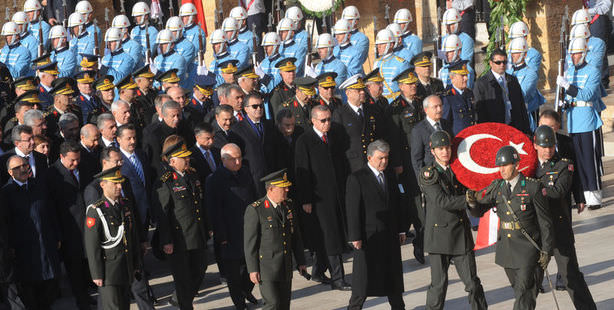 Turkey commemorated Mustafa Kemal Atatürk, the founder of the Turkish Republic, on Sunday, the 75th anniversary of his passing. “Atatürk brought together all of the religious, ethnic and sectarian elements which makes this nation what it is. Let us protect his memory as a unifier,” said Erdoğan.

Ceremonies were held throughout the nation to commemorate the 75th anniversary of the founder of the Turkish Republic Mustafa Kemal Atatürk's death. Remembered every year with a moment of silence at 9:05 a.m., the time at which Atatürk passed at the Dolmabahçe Palace on November 10, 1938, at the age of 58, yesterday was no different as state leaders gathered at Anıtkabır, Atatürk's Mausoleum to lay a wreath in his honor. Events were held throughout the nation in Atatürk's honor on Sunday, including a very special commemoration held by the Prime Ministry Atatürk Culture, Language and History Higher Board, which took place at the National Library and was attended by Prime Minister Recep Tayyip Erdoğan.

"Mustafa Kemal Atatürk's perseverance in the War of Independence and on the path to founding the Republic was done so through his success in bringing together all of the colors of this nation, all of the religions, ethnicities and sects that make this nation what it is," said Erdoğan, adding that founding this nation based on these diversities, which he equally embraced and distanced himself from, was one of this nation's founder's most significant ideals.

The veteran Mustafa Kemal would be the last person in the world that could be considered a vehicle for polarization said Erdoğan, noting that attempts to divide society into separate camps under the name of Atatürk or other symbols created later in his reverence, served as the greatest injustice to his memory. "There has been a distortion of Atatürk's ideals under the name of Atatürkism or Kemalism. These trends have become a vehicle for exploitation by those attempting to exert pressure and redesign the nation," said Erdoğan.

"No ideology based on oppressive, authoritarian, uniformist intolerance of other peoples ideals and lifestyles could ever be derived from his efforts and plight. His greatest ideal was for everyone in the Republic to be equally embraced and distanced and to raise Turkey to the level of modern civilizations. We will remember his name as a unifying value and not as a means for separation as we build the Turkey of the future," state Erdoğan.

'HIS DREAMS ARE ON THE WAY TO FRUITION'

President Abdullah Gül also made an address for Atatürk's commemoration during which he stated, "With its rising economic, political and military force standards, Turkey has now become a respected nation in the world. Through the comprehensive reforms realized, significant strides have been made on the road to democratization. The community and politics now speak a common language. I express with pride that Turkey is now on the path to becoming the country Atatürk once dreamed of."