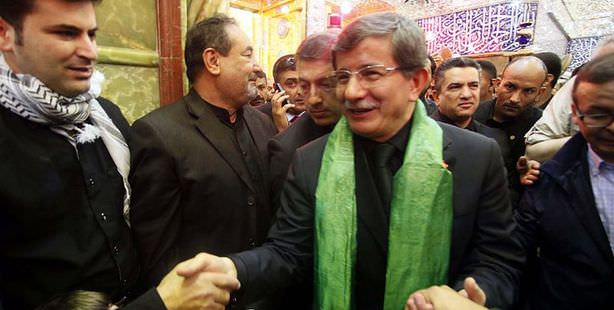 Foreign Minister Ahmet Davutoğlu visited two very significant cities for the Shiite community, Najaf and Karbala, on Monday and met with Shiite spiritual leaders on the second day of a two-day trip to Iraq, which commenced on Sunday.

Foreign Minister Ahmet Davutoğlu paid a very a significant visit to the Shiite holy cities of Najaf and Karbala, where he paid his respects at the tombs of Ali ibn Albi Talib and Hussein ibn Ali and had the opportunity to meet with Shiite spiritual leaders Ayatollah Ali al-Sistani and Muqtada al-Sadr.

Davutoğlu's two-day trip which commenced in Baghdad on Sunday, where he met with Prime Minister Nouri Nouri Al-Maliki, Vice President Khodair al-Khozaei, Deputy PM Saleh al-Mutlaq and his Iraqi counterpart Foreign Minister Hoshyar Zebari, is considered to be a sign of a new page being turned in relations between Turkey and Iraq and the end of an extended stagnant period in relations between the two nations. Leaving no segment out on this visit intending to repair ties and allow relations to fruition, on Sunday, Foreign Minister Davutoğlu paid a very significant visit to the cities of Najaf and Karbala where he met with leading Shiite spiritual leaders in Iraq and delivered the message that sectarian conflicts in the region need to come to an immediate end.

On Monday, Davutoğlu visited the holy Shiite cities of Najaf and Karbala where he met with Grand Ayatollah Ali al-Sistani, the spiritual leader for Shiites in Iraq and the wider region and Shiite cleric Muqtada al-Sadr. Pointing out that al-Sistani is an extremely significant global figure; Davutoğlu explained after their meeting that he stressed the necessity of the sectarian strife in the region coming to an immediate end. In his statement released after the meeting with al-Sistani, Davutoğlu also expressed how pleased he was to be in Najaf, which is a holy town for Shiites, during the sacred month of Muharrem. After his meeting with al-Sistani, Davutoğlu visited the Imam Ali Holy Shrine in Najaf, where Ali ibn Abi Talib, the cousin of Prophet Muhammad, is buried.

While in Najaf, Davutoğlu also met with Shiite cleric Muqtada al-Sadr, during which he reiterated his concerns over the spreading of regional sectarian strife and emphasized once again the need for sectarian conflict to come to an immediate end. "We are working on forestalling any sort of sectarian conflict," stated Davutoğlu. "We discussed what we can do together to prevent the tension in the region from transforming into sectarian strife. There are those who have provoked such conflict and those that will. We are aware that there is a certain deviation in views, however these are not deep divides, they are issues that can be solved through discourse," stated Davutoğlu, adding that on fundamental issues their views are practically identical. Davutoğlu also expressed that both his meeting al-Sistani and al-Sadr were optimistic in terms of alleviating concerns over the spreading of regional sectarian conflict.

NAJAF AND KARBALA DURING MUHARREM

The two cities Davutoğlu visited on Monday, Najaf and Karbala hold high significance for Shiites. For Shiite Islam, Najaf is considered to be one of the holiest cities in the world and is the center for Shiite political power in Iraq. Karbala is another city that is extremely important for Shiites as it was the site of the Battle of Karbala, which took place on October 10, 680 and saw Hussein, the grandson of the Prophet Muhammad and son of Imam Ali, the fourth caliph, slaughtered by the forces of Umayyad Caliph Yazid I. In addition, Davutoğlu's special trip to Iraq commenced on the first day of Muharrem, which is the first month of the Muslim lunar calendar, and is considered to be a time of mourning for Shiite Muslims due to it being the anniversary of the martyrdom of Hussein ibn Ali and all of his supporters in the Battle of Karbala.

In Karbala, Foreign Minister Davutoğlu paid a visit to the Shrine of Hussein ibn Ali, which is not only one of the oldest mosques on the globe, but it also houses the tomb of Hussein ibn Ali, which is considered by Shiites to be one of the holiest places in the world. Davutoğlu demonstrated his solidarity for the mourning of the killing of Imam Hussein by wearing a black shirt and green tie.

"The interest and conversations were what touched me the most"

Davutoğlu documented the day's events on his Twitter account, where he commented on strolling the streets of Karbala during the month of Muharrem for which he wrote "the painful memories of which have been inscribed in our minds." Davutoğlu also wrote that he had the opportunity to converse with his fellow Shiite brothers and sisters and took part in the mourning ceremonies for Hussein ibn Ali and his son Abbas ibn Ali. "What moved me the most was the discourse and the interest we experienced everywhere we went," Davutoğlu shared on his Twitter account.