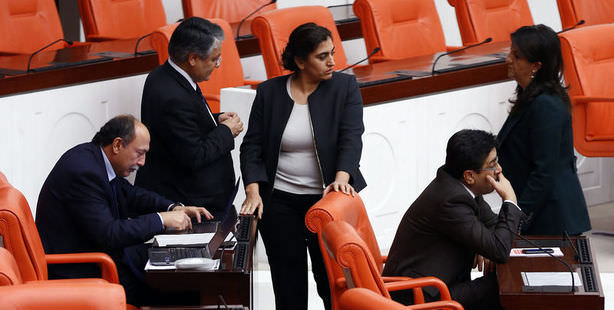 A bill introducing an amendment to a bylaw in order to allow female lawmakers to wear trousers during General Assembly meetings was accepted by the Turkish Parliament on Wednesday as two female deputies attended the session wearing trousers.

Female lawmakers in Turkey are now allowed to wear trousers in General Assembly meetings after a bill introducing an amendment to a bylaw on the matter was passed during yesterday's Parliamentary session. The proposal, brought on by the ruling Justice and Development (AK) Party, was accepted by all political parties in Parliament on Wednesday's vote. Independent Diyarbakir Deputy Leyla Zana as well as former Peace and Democracy Party (BDP) Deputy and recently elected co-chair of the newly established People's Democratic Party (HDP) Sebahat Tuncel, attended Wednesday's session wearing trousers, even prior to the parliamentary vote.

As the proposal was being discussed, HDP Co-Chair Tuncel presented a proposal to allow deputies to enter "without wearing ties" or in "traditional clothing", which was not accepted by lawmakers.

Tuncel expressed that she prefers to wear trousers in general and noted that it allows her to work easier. "You do a job, however just because you are wearing pants, you are not allowed to enter the General Assembly. There is nothing more bizarre then the Assembly deciding how people should dress, how they should sit, how they should cut their hair and whether or not they can wear headscarves. It is an excellent stance to put an end to this ridiculous situation," stated Tuncel.

The amended Article 56 of the Parliament's internal regulations now states, "Women shall wear jackets and skirts or trousers." The lifting of the controversial prohibition, which forced female deputies to wear skirts in parliament, came soon after the lifting of a ban on female lawmakers wearing headscarves. On October 31, several AK Party deputies entered the General Assembly meeting wearing headscarves setting a new precedent in dress code freedom; however, the ban on trousers still remained.

AK Party Kahramanmaraş Deputy Sevde Bayazıt Kaçar and Mardin Deputy Gönül Bekin Şahkulubey, who made the decision to wear headscarves upon their return from completing the Hajj pilgrimage and were some of the first female deputies to enter parliament wearing headscarves, have now changed their photographs on Turkey's Grand National Assembly website to pictures of themselves in headscarves.

Earlier in the week, the Council of State approved the removal of the headscarf ban for attorneys, granting lawyers the option of using photos of themselves wearing headscarves for their registry at the Bar Association.