Diyarbakır transformed into a wonderland of fraternity 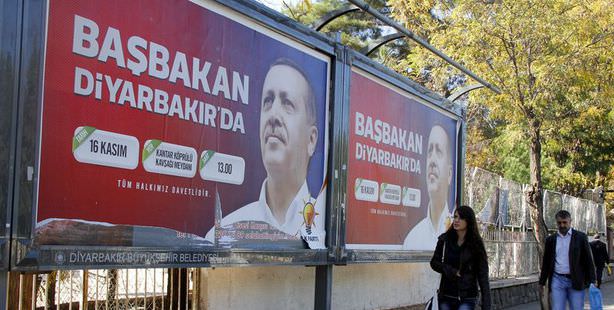 Diyarbakır is enjoying the fervor of today’s impending meeting between Prime Minister Tayyip Erdoğan and KRG leader Massoud Barzani. This historical day will also see the first-ever duo by much-loved performers İbrahim Tatlıses and Şivan Perver. For Barzani, this will be his first visit to the southeastern province in 21 years, while for Perver, this will be the exiled musician’s first return to his homeland in 37 years.

With the weapons silenced in the region through the government's ongoing peace process, Diyarbakır is set to host a historical meeting between the northern Iraq autonomous regional leader Massoud Barzani and Prime Minister Recep Tayyip Erdoğan. The day's events also include a meeting between Prime Minister Erdoğan and Diyarbakır Mayor, BDP's Osman Baydemir as well as a mass wedding ceremony for over 300 couples and an exclusive performance by musical legends İbrahim Tatlıses and Şivan Perver.

The excitement is palpable on the streets of Diyarbakır as the city prepares to host a number of historical meetings. While AK Party slogan vehicles are driving around the city announcing the day's events on loudspeakers, everyone on the streets and the city's civil society organizations seem to be in full support of today's momentous events. Municipal teams have laid asphalt on a one-kilometer stretch of road considered to be the city's protocol entrance. At the entrance of the airport hangs banners printed in Kurdish and Turkish, which read, "To our brother and the architect of the resolution process our Prime Minister Recep Tayyip Erdoğan, from Diyarbakır."

Along with Prime Minister Erdoğan, Massoud Barzani, the leader of the northern Iraq regional administration, will also be spending the night in Diyarbakır. On Sunday, Barzani is expected to pay his greetings to Diyarbakır Mayor Baydemir. Independent Diyarbakır Deputy Leyla Zana, who is known for her close affiliation with Barzani and for spreading the message that Barzani's visit will contribute to the resolution process, arrived in Diyarbakır on Friday and is expected to meet with Barzani at some point during his trip.

On the Prime Minister's second day of his trip, which falls on Sunday, he will be taking part in a number of openings in Ergani where he will later address the public in a rally held at İstasyon Square. Preparations are under way in both Ergani and Bismil for the prime minister's arrival and their chambers of trade and commerce are expected to present Erdoğan with reports detailing the economic concerns in the region. Citizens in Bismil are also highly anticipating the Prime Minister's Sunday arrival.

"I COME FOR PEACE"

Famous Kurdish singer Şivan Perver, for whom this will be his first return to his homeland after 37 years in exile, says that he decided to participate in this historical weekend in Diyarbakır upon invitation from Barzani and is coming with the aim of instilling peace. Perver explained that the first thing he will do upon his arrival is to visit his mother's grave in the town of Amed, where he says two days will not be enough to satisfy his longing to reminisce with his friends and family in his hometown.

In a written announcement on his impending visit, Perver responded to criticism of his arrival to Diyarbakır alongside Prime Minister Erdoğan by stating, "I invite all of the segments in Turkey to support peace and tolerance and mutual respect between our people and to further develop sentiments of love and fraternity as well as for pluralist freedom and a democratic society. This is the only reason I will be coming to Diyarbakır today. For years, it has been my greatest desire to meet with my people in Amed and to sing one of my songs with them together. My heart wishes that I could have returned hear with all of the musicians and intellectual friends that have been sentenced to live in exile," said Perver, adding, "Let us dance together in an environment where all those people who have been kept in dungeons for political reasons have now regained their freedom."

ALL EYES IN N. IRAQ ARE ON DİYARBAKIR

The invitation extended by Prime Minister Erdoğan to the Kurdish Regional Government leader Barzani has of course hit the main agenda in Northern Iraq. The entire region is closing following today's historical meeting and renowned Northern Iraqi writer and intellectual Mesud Abdulhalık has commented on the importance of the event by stating that Turkey has embarked on a new era and is breaking down old taboos and cement walls. Meanwhile, Kurdish party representatives in Iran state that the resolution process under way in Turkey is a step of hope for the region and have expressed the intentions of beginning their own resolution process of dialogue in Iran, to solve their own Kurdish issue.

Swedish Foreign Minister Carl Bildt wrote on his Twitter account on Thursday, "It will indeed be historic when Turkey PM Erdoğan and KRG President Barzani meet in Diyarbakır." Meanwhile, the foreign press has drawn attention to the fact that KRG leader Barzani has issued harsh criticism of the Democratic Union Party (PYD), the Syrian offshoot of the PKK. A report by BBC states, "Barzani steps up rhetoric against PYD", by targeting the organization's decision to act alone in attempting to form an autonomous administration in the region.

This is a translation of an article originally written by Hazal Ateş and Hüseyin Kaçar.