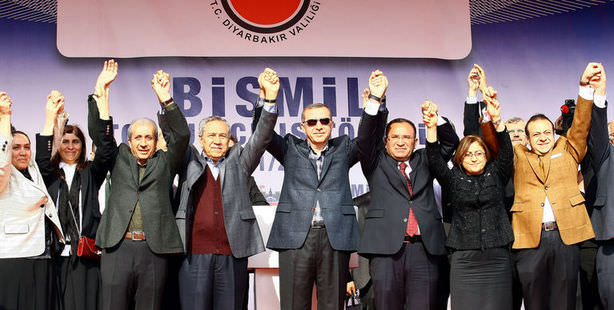 Prime Minister Erdoğan says the resolution process will have a snowball effect on the region. “As Diyarbakır changes, so will Eastern Anatolia, Southeastern Anatolia, Iraq and Syria. The sun of peace that will be born will shine on all of our geography,” stated Erdoğan at openings in Diyarbakir on Sunday.

On the second day of a historical trip to Diyarbakir, Prime Minister Recep Tayyip Erdoğan relayed a series of significant messages regarding the ongoing resolution process to put an end to the decades-long Kurdish issue. After attending a joint opening ceremony for 1,300 facilities in central Diyarbakir on Saturday, the next day, Prime Minister Erdoğan moved on to Bismil and Ergani for yet another set of opening ceremonies during which he relayed the following messages on the ongoing peace process.

A HISTORICAL DAY FOR DİYARBAKIR: Prime Minister Erdoğan addressed crowds at inauguration ceremonies held in Bismil and Ergani during which he stated that not only has this trip allowed them to put an end to their longing for their brothers in the region, but it has also allowed them to conduct a joint opening for 17 separate services. "When you include the openings we are holding in Bismil and Ergani, this trip has brought Diyarbakır an 880 trillion lira investment," stated Erdoğan.

Erdoğan remarked that Saturday was not only significant for the series of openings held in Diyarbakir, but was also a historical day as a result of a number of additional surprises. "Iraq's Kurdish Regional Government leader Mr. Masoud Barzani also shared in the excitement of these openings with us. Yesterday, we also witnessed together a meeting of sorts, a reunion and also what was the end of an extremely extended period of longing. It was the end of 37 years of longing by our valued performer Şivan Perwer. He was joined by yet another extremely valued performer of ours İbrahim Tatlıses and together they performed a wonderful concert. We participated in a mass marriage ceremony for 400 couples. We took this step on behalf of our Family and Social Affairs Ministry," stated Erdoğan.

THE REGION IS GAINING STRENGTH: Diyarbakir needs to think long and hard and strongly standup for peace, said Erdoğan also pointing out that there is "a new era, a new climate and a spring atmosphere being experienced not only in Turkey but throughout the region. "This is just the start," stated Erdoğan recalling how the resolution process has changed the nation over the year and stating, "just imagine all of the benefits the resolution process will bring over the next few years. This process will have a snowball effect, as it progresses it will continue to grow and as it expands hopes will be increased and the region's destiny will be altered. South and Southeastern Anatolia will be transformed. And, as Diyarbakır changes, Iraq and Syria will also be transformed. The sun of peace which will rise in Diyarbakır will bring warmth to our entire geography. Tightly embrace this resolution process and stand up for peace," said Erdoğan.

Prime Minister Erdoğan also commented on certain circles' discomfort with the resolution process by stating, "Why are they uncomfortable? Because, they are the ones that are nourished by the blood and deaths of our youth, they are nourished by those poor people they poison with drugs. Let us not give them any opportunities to sabotage this process. I say, let us not give them the chance to disturb this peace."

LET US JOIN HANDS: "We will join hands, as equal and free citizens, and in front of the state and in front of the law, as equal individuals, hopefully we will ensure Turkey experiences many more beautiful days to come," stated Erdoğan adding that Diyarbakır and Bismil deserve many more services than they receive at present. "Hopefully, all together, we will allow Bismil and Diyarbakır to transform and attain the position deserved," stated Erdoğan.

Prime Minister Erdoğan also referenced Ahmet Kaya, a Kurdish musician who lived in exile in Paris before his passing, by recalling how the beloved performer had played for him in his send off to serving time, by stating, "In my world, his fidelity has a very special place."

Vowing to continue to overcome all obstacles on their determined path with the resolution process, Erdoğan stated, "Words are mightier than weapons. We said that whoever has something to say, they should bury their weapons. We said this is how we will embark on this path. However, those who do not believe in their own words, do what? They embrace weapons. We say bury your weapons and leave them. Come with your words, come with your sweet talk," stated Erdoğan.