Deputy PM Arınç: “There is no longer a need for prep schools” 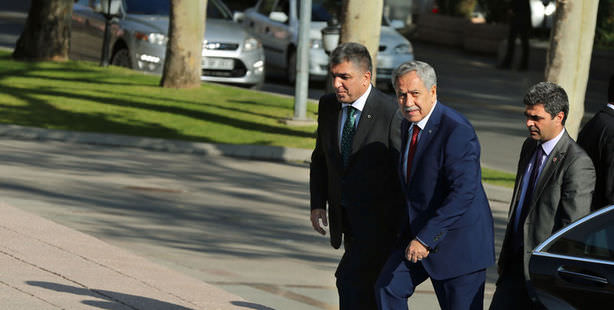 Speaking to reporters following Monday's Council of Ministers meeting, Deputy Prime Minister and Government Spokesman Bülent Arınç weighed in on the 'dershane' prep school debate and waylaid speculation of a general amnesty on the horizon.

Remarking on speculation of a potential general amnesty, which surfaced from an address made by Prime Minister Recep Tayyip Erdoğan over the weekend, Arınç stated, "The Prime Minister's speech was very clear. If you pay attention to the entire paragraph, you will see that he definitely does not mention any anticipation of a general amnesty for now. A general amnesty is not on our agenda today. The Prime Minister was drawing a perspective for the future in his speech. In other words he was saying that there should not be anyone left in the prisons or up in the mountains and that there should be peace, freedom and for people to better represent themselves," stated Arınç adding, "We will not be the ones to empty out prisons, There is a judicial system in Turkey." The Deputy Prime Minister told reporters, "Our Prime Minister said that when terrorism and terrorist attacks comes to an end and weapons are relinquished, and when the time comes in which ideas and politics are discussed; Turkey will see beautiful days in the future."

PREP SCHOOLS ARE NO LONGER NEEDED

"We are aware of the reality of these prep schools. It was decided that during our government term it would be the right move to transform these prep schools into private schools somehow, based on two reasons. In the past, there was a need for prep schools as a result of our students being unsuccessful due to the inefficiencies in the education system. There no longer is that need," stated Arınç, emphasizing that education should be provided by the nation's schools. Explaining that the issue they are mainly focusing on is promoting private schools, Arınç stated "These prep schools can use their experience to transition into a private school offering education." Arınç pointed out that many people have legitimate concerns over the 'dershane' debate, however he asked, "Could it be that some are trying to stage a biased deliberate campaign? This issue is one that will benefit Turkey. We do not have any need for an intermediary between our government and our students and parents. Research centers and reading rooms are not included in this regulation. Remain calm. Hopefully, this will reap positive results."

I WOULD NEVER HARM MY PRIME MINISTER

Deputy Prime Minister Arınç also commented on the recent deviation in statements made regarding the co-ed housing debate by stating, "I am serving my duty. As a minister and as a deputy for the AK Party, any statements, actions or acts that I make should not harm the government, nor harm my prime minister. There are no issues between us. We have discussed everything necessary and we will continue to do so as we remain in service."