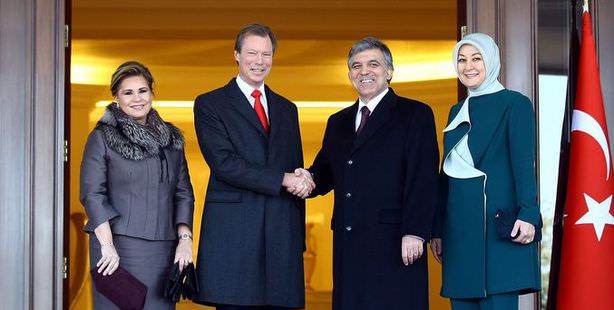 President Gül welcomed Grand Duke of Luxembourg Henri and his wife Grand Duchess Marithea Teresa to the Çankaya Palace on Tuesday. Referring to Turkey as the bridge that ties Europe to Asia, Duke Henri expressed his strong support for Turkey’s EU bid during a joint press conference.

President Abdullah Gül and First Lady Hayrünnisa Gül welcomed Luxembourg Grand Duke Henri and his wife Grand Duchess Marithea Teresa to the Çankaya Palace with an official ceremony on Tuesday.
In a joint press conference held following the meeting, Grand Duke Henri stated that Luxembourg supports Turkey's bid to join the European Union. "Turkey is a bridge that links Europe to Asia and is one that Europe could generate great benefit from," stated Henri who also reiterated Luxembourg's strong backing for Turkey's bid to join the EU.

Gül: We must develop our trade

President Gül emphasized the historical significance of Grand Duke Henri's visit and stated, "Luxembourg's investments in Turkey are at 6.5 billion dollars. Our trade volume is at around 250 million dollars; however, we hope to further develop joint trade."

In the evening, President Gül held at special dinner at the Çankaya Palace in honor of Duke Henri, for whom this was his first official trip to Ankara.