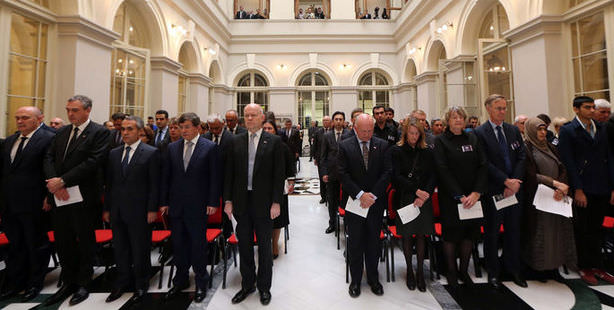 Speaking at a ceremony held on the 10th anniversary of the British Consulate and HSBC bombings in Istanbul, Foreign Minister Davutoğlu stated, “They will never be able to put an end to our solidarity against terrorism.”

Wednesday marked the tenth anniversary of the bombings at the British Embassy in Beyoğlu and the HSBC headquarters in Levent that took place on November 20, 2003 and are dubbed the Istanbul bombings, which include two attacks staged on synagogues just five days prior on November 15, 2003.

A ceremony of remembrance was held on Wednesday for the victims and families of the Istanbul bombings, which killed 57 people and wounded nearly 700, at the British embassy. Prior to its start British Foreign Minister Secretary William Hague and British Ambassador to Turkey David Reddaway left wreaths at ground zero. Speaking to reporters, British Foreign Secretary Hague extended his gratitude to Turkish citizens and stated, "The embassy and its staff are well aware of the friendship and support offered by locals and Istanbul residents since the attacks took place. Therefore, on every anniversary we also pay remembrance to Turkish friendship." Hague was joined by the families of the victims in the bombings as well as embassy staff for the wreath-laying ceremony.

A CRIME OF HUMANITY

The commemoration ceremony was held inside the British Embassy and marked the first time over the past ten years that it was attended at a Foreign Minister-level. Referring to the attacks as crimes against humanity in a joint press conference with his British counterpart, Foreign Minister Ahmet Davutoğlu stated that as in the past, Turkey and Britain continue to stand side by side in the fight against terrorism.

"No matter how vile and treacherous these attacks are and no matter how atrocious the methods used to damage the conscience of humanity, they will never put an end to our solidarity against terror," stated Davutoğlu. Vowing that the joint effort will continue against those who organize and provide resources for terrorist attacks all over the world, Davutoğlu stated, "We are all here standing up against the rationale of affiliating terrorism with any form of religion, ethnicity or sect. Terrorism is a crime against humanity and regardless of whatever religion, race, sect or ideology those who commit these crimes uphold, it constitutes an attack against all of humanity."

During the joint press conference, British Foreign Secretary Hague pledged support for Turkey's fight against terrorism, by stating, "You will always have our support in combating terrorism and instability, including as you bear the burden of the conflict in Syria and as you advance your political process. They failed to divide us and in fact, our ties are stronger now than they have ever been."

Davutoğlu, who later met with Hague for an additional nearly two-hour meeting, shared with reporters that the situation in Syria was the main discussion. Davutoğlu expressed his desire for the Geneva 2 Conference to be held as soon as possible and stated, "This debate should not be a reason to overlook the ongoing crimes of humanity being committed in Syria."

A LETTER TO LAVROV

Foreign Minister Ahmet Davutoğlu also expressed that his ongoing efforts continue to secure a fast conclusion to trial proceedings and the return of Greenpeace member Gizem Akhan who was detained in Russia and released on bail on Thursday. "Last week I sent Lavrov (Russian Foreign Minister) a personal letter requesting his assistance. Davutoğlu also stated during the joint press conference with his British counterpart Hague that Turkey's consul general in St. Petersburg held a meeting in Russia regarding Akhan's prison conditions, demands and views on her legal proceedings. Russian authorities facilitated a private meeting, explained Davutoğlu, of which the details have been shared with her family. Gizem Akhan was amongst 30 Greenpeace activists detained by Russian coast guards security forces in September 19 during a protest of a Gazprom rig in the Arctic Sea. She was released on bail by a Russian court on Thursday after serving two months in custody.