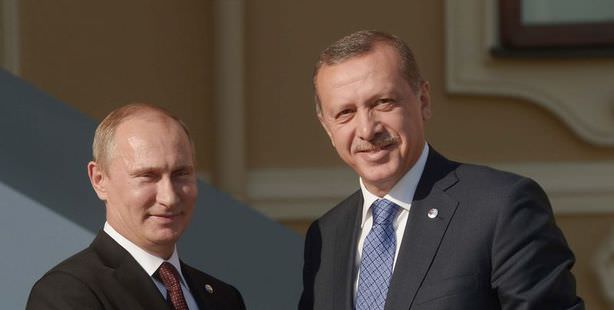 While Prime Minister Erdoğan and Russian President Putin reached a consensus regarding the immediate need to establish internal peace and put an end to the humanitarian crisis in Syria during a meeting held in St. Petersburg on Friday, Erdoğan also called on Putin to allow Turkey to join the Shanghai Cooperation Organization.

Prime Minister Recep Tayyip Erdoğan arrived to the Russian capital of St. Petersburg on Thursday, accompanied by a delegation of ministers, to take part in Friday's fourth meeting of the High Level Cooperation Council as well as to hold a tête-à-tête with Russian President Vladimir Putin after which they took part in a joint press conference.

Prime Minister Erdoğan emphasized that there was no longer any time left to be wasted when it comes to the situation in Syria and that every second that passes allows the regime to gain time and stated, "We need to pave the way for the Syrian public to be able to vote for a leader using their own volition." Putin in return expressed that he shares Prime Minister Erdoğan's sentiments that the Syrian public should be allowed to determine their own destiny.

When Putin mentioned Turkey's experience as a result of its long-standing bid to join the EU, Erdoğan responded, "It is very true we have 50 years of experience. But what I say is, let us into the Shanghai Cooperation Organization (SCO) and save us from this torment."

During the joint press conference, Prime Minister Erdoğan expressed his condolences for the lives lost in the airplane crash in Kazan, which killed 50 Russian nationals. The Prime Minister noted that Turkey and Russia are achieving great success in a number of areas in mutual relations and there has been a significant improvement over the past year. Erdoğan expressed that he had the opportunity to discuss numerous regional issues including Azerbaijan-Armenia relations as well as regional issues including the situations in Syria, Libya and Egypt. "Putin and I had the opportunity to discuss how we can establish the grounds for positive democracy-based developments that will reflect the public will." In reference to the situation in Syria, Erdoğan stated, "Our greatest wish is for us as politicians to do what befalls us in order to establish long-lasting peace. I want to call on the entire world from St. Petersburg in regards to the situation in Syria. In Syria, 1,500 people have been killed with chemical weapons, while 150,000 were killed with conventional weapons. In my opinion, any act that ends in death is a crime. Civilians have been killed with planes and helicopters and the regime bears the primary responsibility. Opposing extreme groups also hold responsibility; however, all they have are short and long-range weapons. The regime, on the other hand, has indiscriminately demolished, homes, mosques and cities, and all with conventional weapons," stated Erdoğan.

Prime Minister Erdoğan recalled the UN Security Council's inability to reach a consensus on measures to take in the situation in Syria, however, 150,000 people have been killed he said, while also pointing out that Turkey currently hosts 600,000 displaced Syrians, while one million reside in Lebanon and nearly 500,000 Syrian refugees are staying in Jordan. "People are not just running for nothing, they are running from death. They are leaving their own homes and running and we as bordering neighbors to Syria are bearing the burden," said Erdoğan.

The Prime Minister expressed his support from the start for the holding of a second Geneva conference. "However," he said, "I unfortunately must say that no results were reaped from the first meeting. Once again, we will support these efforts and hopefully they will reap results. There is no more time to waste, and any time that passes only allows the regime to gain time. I want to say one last time that we need to pave the way for the Syrian public to be able to elect their own leaders through their own volition."

Russian President Putin told reporters that he and Erdoğan discussed the situation in Syria in length and stated, "In the end, our objectives are the same. We want peace to be established. We have reached a consensus to continue working on finding solutions that best suit us."Putin concurred with Erdoğan's sentiments that "time should no longer be wasted" and that "the Syrian public should be the ones to determine their own fate," and expressed that the Geneva 2 conference should take place as soon as possible.

Putin also shared that he had the opportunity to speak with Bashar al-Assad and to express his concern for the humanitarian situation in the country and stated, "We must not forget the tragic situation for these innocent people. I share Prime Minister Erdoğan's concerns on this matter. In the end, our ultimate goals are the same and that is to establish peace. We reached a consensus to seek out solutions that are best appropriate for us and to continue working on the matter, which has to do entirely with it being a humanitarian situation."

'LET US INTO SHANGHAI'

As Putin responded to a question regarding the shelving of Ukraine's trade partnership agreement with the EU, the Russian President referred to an intention to benefit from Turkey's extensive experience due to the nation's decade-long bid for EU membership. Putin's comment was taken in jest as Prime Minister Erdoğan responded in a similarly humorous manner by stating, "That's very true. Turkey does have 50 years of experience. However, what I am saying is, let us into the Shanghai Cooperation Organization, and save us from this torment."

In response, Putin stated, "I would definitely like to express that Turkey's significant and independent approach to world issues, means that you will continue to exert more effective efforts on regional issues. At the very least, this is what Russia hopes for."

Erdoğan in return reiterated the importance they have attached to joining the SCO, something which he said he has mentioned previously, while also announced that Turkey is ready and willing to sign on to free trade agreements with Eurasian countries.

This is a translation on an article originally written by Mehmet Ali Berber.