Cypriot leaders share a meal of peace on the island 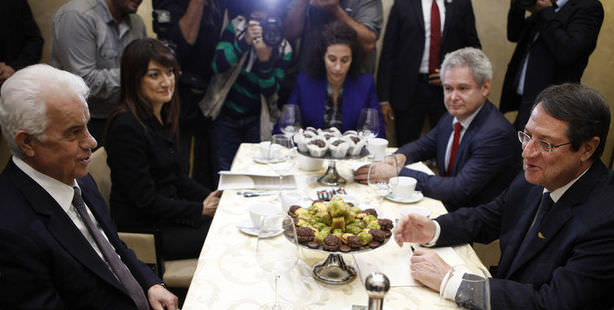 Greek Cypriot Administration leader Nicos Anastasiades joined Turkish Republic of Northern Cyprus President Derviş Eroğlu at a dinner held at a restaurant situated near the Ledra Palace Border crossing on Monday evening, which is the UN-controlled buffer zone that has separated the island for nearly four decades. The unofficial meeting, which lasted two hours and 40 minutes, was said to have been arranged amongst themselves in an effort to reach a compromise on a joint text to initiate the revisiting of peace negotiations.

After yesterday's surprise informal meeting, Anastasiades will be joined by five ministers for a trip to Brussels for a series of EU meetings.

This is a translation of an article originally written by Emre Diner.