Taking the scalpel to a historical wound 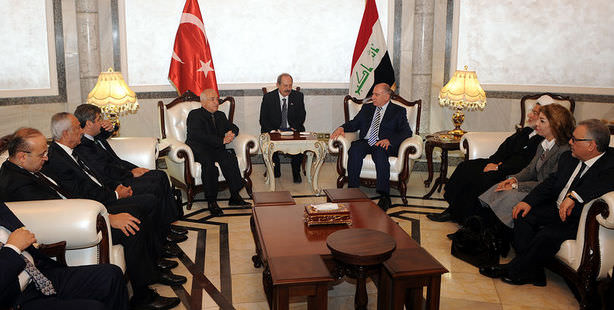 After scanning through 90-years worth of archives as well as hearing out members of the PKK, the Resolution Process Evaluation Commission presented a 420-page report to Parliamentary Speaker Cemil Çiçek on Monday. The report clearly defines the Kurdish public as not demanding autonomy; however, it includes the request for a redefinition of terror-related crimes.

The Resolution Process Evaluation Commission, which constitutes the parliamentary branch of the ongoing resolution process, presented a 420-page report to Speaker of the Parliament Cemil Çiçek. The report emphasizes "trust in the process", requests a redefinition of terror crimes and proposes the lifting of village guardianship. Commission Chairman Justice and Development (AK) Party Amasya Deputy Naci Bostancı was joined by fellow commission members in presenting the report to Çiçek, which will be released to the public on Friday. Opposition parties Republican People's Party (CHP) and the Nationalist Movement Party (MHP) refrained from assigning members to the commission, while the sole opposition party that is a part of the commission, the Peace and Democracy Party (BDP), will be submitting an additional report.

The report, which notably points out that the Kurdish community is in no way seeking self-governance, contains the following assessments:

* Armed violence must no longer be a threat to public safety and parallel to the establishment of ordinary conditions, the guardianship system could be lifted.

* The PKK and the Kurdish issue must be dealt with in separate parameters. Local administrations should be fortified, within the framework of the central administration.

* The report also includes a number of surveys used to determine that the Kurdish public does not harbor demands for self-governance.

* While taking into consideration both the terrorism environment and the sensitive situation along the border, decreasing the number of military security regions to a minimum as well as maintaining dialogue are crucial to ensure the permanence of this environment.

* All mines need to be cleared by security forces.

* Efforts need to be exerted towards disarming terrorist organization members and ensuring they become a productive part of society.

* The definition of terrorism and terror-crimes needs to be narrowed down and the anti-terror law constricted.

* Dialogue must continue between all parties (Öcalan-Kandil) in order for the resolution process to continue.

* In addition to the government process, society must also continue to exhibit support. All state institutions should contribute to the resolution process.

* Certain steps could be taken to improve prison conditions. First and foremost, the situation of convicts that are suffering from serious and fatal diseases could be reconsidered.

While presenting the comprehensive report, AK Party Deputy İdris Şahin stated that they met with a total 129 people, 43 of which were civil society organization members, journalists, writers, politicians and terrorism victims, while 42 were convicts currently serving time in nine penitentiaries spread out through five provinces as well as relatives and loved ones of victims and terrorist organization members.

Parliamentary Speaker Cemil Çiçek heads to Iraq for an official one-day visit on Tuesday. Çiçek was scheduled to meet with Iraqi Parliament Speaker Osama Al-Nujaifi after which the two were to hold a press conference. Later, Çiçek was scheduled to meet with Iraqi Prime Minister Nouri al-Maliki and Vice President Khudayr Musa Jafar Abbas al-Khuzai. Çiçek also planned to pay a visit to the Turkish martyr's cemetery and meet with members of the Turkmen community in Iraq.