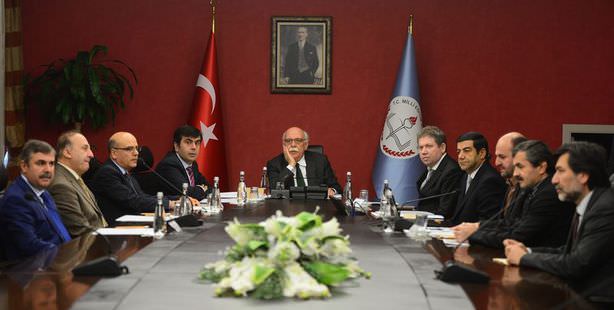 National Education Minister Avcı achieved a healthy compromise at a meeting with owners of the nation’s largest ‘dershane’ exam prep school chains. These prep school owners concur that the nation’s best interests are at hand and have agreed to transition into open-education high schools, which will be named “Academic High Schools.’

National Education Minister Nabi Avcı held a special meeting with owners of seven of the nation's largest 'dershane' chains to discuss the new transition of these exam preparation schools into open-education institutions. The leading representatives of the 'dershane' system agree that the move is to the country's advantage and state, "The nation's best interest is more important than us. Instead of calling this the death of a caterpillar we say it is the birth of a butterfly."

The transformation formula presented by 'dershane' administrators to the National Education Ministry was welcomed by Education Minister Nabi Avcı. Accordingly, open-education institutions will be renamed "Academic High Schools" and will be limited to 20 hours versus the standard 40 hour weekly classroom time. These academic institutions will also function as a sort of university preparatory school. Additional programs may also be offered for vocational, İmam Hatip religious vocational and sports academies. Dershane administrators request that these 'academic high schools' be made a permanent fixture of the national education system and to operate for the same four-year time frame as standard high schools and to not be prohibited from teaching courses such as mathematics or Turkish.

AVCI: WE HAVE REACHED A MUTUAL CONSENSUS

Minister Avcı told reporters after the meeting that they reached a mutual consensus that switching to an "Academic High School" will allow for a healthier transition, and stated, "We received proposals for the timing of this transition period as well as regarding who and under what conditions will be able to receive services from these institutions. From our perspective, these were positive proposals that should be evaluated," said Avcı adding that they will also evaluate the proposal to allow these "Academic High Schools" to accept vocational school, sports, religious or fine arts students seeking supplemental classes, such as mathematics for university preparation. Avcı also added that the tuition fees for these "Academic High Schools" will be supplemented by the state.

'Dershane' representative and TÖDER Vice-Chairman İbrahim Taşel commented on the meeting by stating, "We expressed the issues that are indispensible to us and what we feel would be beneficial to reap positive results when it comes to the project of transitioning 'dershanes' to "Academic High Schools". Exchanging views does not mean dictating a perspective. The nation's best interests are more important than ours. We will continue to maintain our constructive stance on the matter."

ÖZDER Chairman Ahmet Akça also relayed his views following the meeting by stating, "We are not necessarily demanding that 'dershanes' should continue to operate. Through this transition process, the experience, knowledge and capital acquired through the 'dershane' system could be integrated into the national education system through a change in format. We presented our studies on whether the open education format could be given a new private school status as part of the transition project. My belief that this transition will take place without aggrieving any parents, students or employees and that we can reach a compromise at some point has increased as a result of this meeting.

This is a translation of an article originally written by Safure Canturk and Eda Işık.