Turkey and Iran call for a ceasefire in Syria 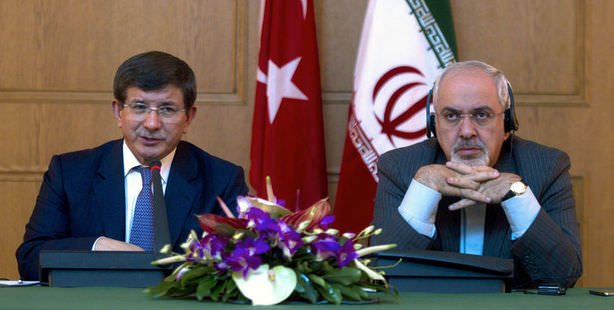 Having met with his Iranian counterpart Zarif in Tehran, Foreign Minister Davutoğlu announced on Wednesday that they will now be directing efforts to establish a ceasefire in Syria prior to the highly anticipated Geneva-2 Conference scheduled for this upcoming January 22.

Foreign Minister Ahmet Davutoğlu was joined by Iranian Foreign Minister Mohammad Javad Zarif on Wednesday for a joint press conference during which they called for a ceasefire in Syria prior to the impending January 22, 2014 Geneva-2 Conference.

Foreign Minister Davutoğlu arrived in Iran on Tuesday to take part in the 21st Foreign Ministerial Economic Cooperation Organization meeting. On Wednesday, he was first received by Iranian President Hassan Rouhani and later by his Iranian counterpart Zarif after which the two foreign ministers took part in a joint press conference.

Davutoğlu began his delivery by congratulating his Iranian counterpart Zarif on the interim nuclear accord reached in Geneva and expressing that while Turkey is against the proliferation of weapons in the region and the world, pacifist technology should not be prevented. He also added that removing sanctions imposed on Iran will have a positive impact on bilateral relations as well as on Iran's economic influence in the region.

"Turkey and Iran's economies are economies that complement one another and are not rival economies. Therefore, a significant synergy may surface through mutual integration. I believe that our bilateral relations, especially in regards to trade, energy and culture will progress with a great impetus in the upcoming period," stated Davutoğlu.

Davutoğlu and Zarif call for a ceasefire in Syria

Davutoğlu shared that he and Zarif had the opportunity to discuss the situation in Syria at length and stated, "We discussed how we could contribute to the Syria issue. Syria holds high importance for the stability of Lebanon and other regional nations as well as for Turkey and Iran. Amongst the main issues we handled were securing the region's borders, establishing a stable and secure region and working together against terrorism and provocation in the region."

Davutoğlu pointed out that the arrival of the winter season will make conditions worse for Syrians and emphasized that neighboring states cannot just sit and watch as the situation gets even wore in Syria. "Turkey and Iran agree on establishing calm in the area, and will continue to exert efforts to end the clashes," Davutoğlu stated.

"We have been working with Iran on establishing what can be done to help the Syrian people, both the refugees and those in need in Syria which now number well near five million. We share the same point of view with Iran and agree on a relative ceasefire in Syria in order for the Geneva-2 Conference to be successful," Davutoğlu told reporters in Tehran.

Foreign Minister Davutoğlu underlined that the situation for the Syrian public continues to deteriorate and emphasized that efforts to establish peace should not be left to wait for the peace conference to take place in January.

"All of our efforts are to end the conflict and call for a ceasefire and if possible, even before the Geneva-2 conference takes place," Iranian Foreign Minister Zarif told reporters.

"We support the political will and legitimacy of the Egyptian public"

Davutoğlu also responded to a question on Turkey's policy on Egypt in which he stated, "We are not supporting Morsi, we are supporting the political will and legitimacy of the Egyptian people." Pointing out that Turkey has never supported any group or sect in the region, Davutoğlu stated, "We support principles. We believe that political leaders should always be elected by the public and changed by the public. We are against any change in regime brought on by the military anywhere in the world."

Morsi came to power through an election held in Egypt in 2012 in what was then a free and just environment said Davutoğlu reiterating that Morsi was elected in a fair election. "It should not be considered normal by anyone for an authority established by the public's free political choice to be brought down through military intervention. Unfortunately, today we are witnessing a number of countries seeking to find ways to legitimize this method," stated Davutoğlu.